There are two key indicators that it’s nearly Christmas: my Instagram feed is full of people showing off their Christmas trees (sorry, very boring); and oppo fans start singing ‘Feed the Scousers’ (sorry, incredibly boring…..might have been funny for self-deprecation a while back , but Liverpool now ranks 11th in Cities across the UK in terms of economic wealth and higher than Newcastle, so bleurgh, stick you Stotty Cake where the sun don’t shine).

As regular readers (are there any? You must be mad, or just desperate for something to do) will know, I’m not a Scouser anyway, but by the time I’d driven like a snail up the M6 (building a ‘Smart’ motorway…..how ironic) I was really rather peckish, so I certainly needed feeding. But I was then fed a diet of the worst football seen at Goodison since the West Ham defeat. Appalling. Simply dreadful. And that’s me being positive. 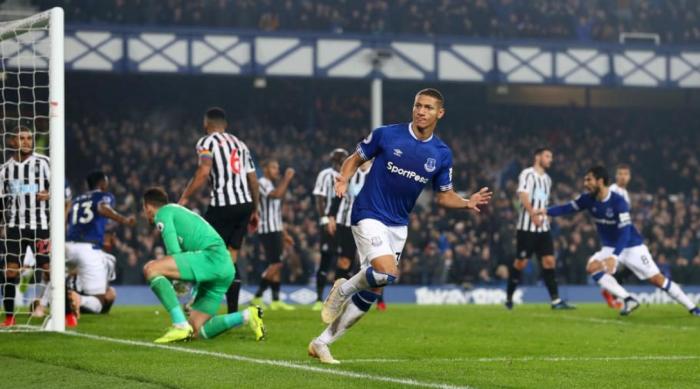 Richarlison’s goal did little to spark us in to life, with the mental exhaustion that often follows a derby, especially one with the ending we had to endure, leaving the patient incapable of anything resembling a smile, and certainly not a well directed pass or cross.

It is one game. Let’s remember that, and Monday will be a stern test too, as a very strong and physical side (plus Deulofeu) visit for a handy 8pm start for the Watford locals (Watford were my closest league side at birth, my cuz even sold programmes for them, but the Club now is a far cry from those homely old stands and supporters that trudged down Vicarage Road) who I’m sure are delighted to have this fixture on a school night. Don’t expect many away fans, but don’t be under any illusion, Watford will be another stern test for Everton.

Newcastle was just one game, but dear oh dear, I have never failed to comprehend how 11 players can all perform as badly collectively, as they did last night. Pickford did ok, but was rarely called upon until the goal and then late on. Digne had his worst game in a Blue shirt with his crossing particularly poor – but he did have his moment, when yet another Bar Code tackle chopped at his Achilles and his piercing scream cut through the moribund atmosphere leaving us in no doubt he’d be out for the rest of the season. Five minutes later he continued to cross the ball as if it was his first time.

Coleman was just as bad, sorry but true, and seemed reluctant to take on his man, perhaps a reflection of having been caught out this season when too far forward, but he’s half the full back he once was, and my fingers are crossed that he returns to form soon, otherwise JJK will be back in the mix, and I’m not fully convinced he’s ready to be a regular starter in the Prem. Mina and Zouma were pretty assured on the whole, and unlucky though Keane was to be dropped to the bench for a breather rather than poor form, it may well be that The Tall One and The Brick Outhouse One will be the perfect combination for Watford. Praise be, we witnessed a Zouma step over as well for goodness sake, and unlike our Right Winger, Mr Walcott, he didn’t use the ball as an obvious trip hazard in the process.

Praise is usually lavished on Gomes, but even he was off the boil last night. Some excellent strength to protect the ball, but a wayward shot or two, and that unheard of thing, a misplaced pass, more than one in fact. It seems that it was a virus. Sigurdsson was nowhere near his normal levels, and his pfaffing instead of shooting missed us a goal opportunity, and his directional sense was well off. Even Gueye wasn’t at the [Blaydon] races last night. Lookman fluffed his opening night lines, but deserves another chance because the man he replaced in the starting line up, our Theo, has been fluffing them for a while. The brilliant early ball from Pickford that sent Walcott through on goal was wasted when he forgot to take the ball with him, and yet more groans from the assembled faithful. Richarlison’s goal lets him off a bit, but he too wasn’t at top notch, again hardly surprising if you’ve got a host of players hacking away at you.

We need to talk about Cenk Tosun. I actually felt sorry for him in the first half, when he made a number of runs that weren’t spotted by our midfield, and his frustration was obvious. His chance came though, and only a ridiculous point blank save by Dubravka kept him out. Many have jumped to the conclusion, not without some justification, that Tosun isn’t good enough. They may be right, but I’m not there yet. It won’t be easy to wrest a top class striker away from any Club in the world in January, so it may be that Cenk, DCL and Richarlison will be the ones tasked with solving our goalscoring problems, with Niasse most likely to be leaving, and even if he wasn’t, clearly not being good enough, despite his effort and awkwardness.

I’ll leave it there. Back up to Goodison for a midweek night match next Monday, what joy awaits my journey to and fro, and a very important match for Silva and his not-very-merry-men to win if we are not to lose the valuable momentum gained.

View all posts by rossjcrombie

2 thoughts on “Obstructed View – Reflections on the Newcastle (H) Game”