Mmmm. Not quite what I’d hoped for at my first trip back up the M6 to Goodison, and I’m not talking about the seemingly endless works to build us a “SMART” motorway. Doesn’t seem very clever at the moment, I must say. 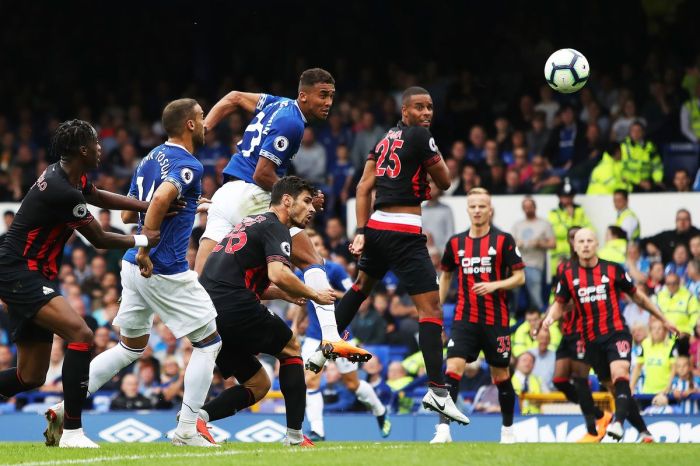 And of course the 90 minutes was none too clever either, and certainly neither were some of the reactions to it on Twitter, that ever-reliable guide on what so-called ‘true fans’ think of the performance of the boys in blue. Let’s be candid here, I left feeling immensely frustrated and disappointed that we’d managed just one effort on target, and had been left bereft of ideas at how to break down a determined defensive display against a dogged Huddersfield side, who to all intents and purposes seemed to think that Everton is one of the places to go to and deny the opposition any space whatsoever and they’ll pick up a point or three. Which they did. Their display was probably little different against City, but the gaping difference between City and Everton is that they have all the players and tactics available to trounce deep-lying defensive units, and we didn’t seem to have a clue. Not one.

What typified this for me were the free kicks out wide. Huddersfield marched up high, very high, and every time we’re caught offside when the ball is played. Did anyone not think to play it short to a blue who could go down the outside and cross the ball from there, with defenders running back to their own goal, and offside traps nullified? Or in open play, why did Walcott, Digne or Coleman, or latterly Baines and Lookman, not try to  take the ball around the last man to the by-line. We know they can do this, and I thought this is the more adventurous display Silva wanted, but we were far too cautious.

We are in an era when the younger generations (probably below 30) want everything NOW. Sorry if this is patronising, but this is how it seems to me, there is little patience in life. There is little patience it seems in waiting for Tom Davies and the youth cadre to show their true talents, and instead of just accepting that these are good young players who are going to develop, all of a sudden, some are quick to write them off. God help us.

Davies yesterday was pretty decent for most of the first half, but then struggled to string any accurate passes together in the second half, at a time when we needed penetration in to the front line, and through or past the Yorkshire Grits (although I’m not sure where in the Pennines Hadergjonaj, Schindler and Kongolo are from, but decent defenders they certainly proved to be). But he was hardly alone, with almost every Everton player guilty of misplacing passes, adding to my frustration and high blood pressure. BUT HE’S 20. And so is Ademola Lookman. And DCL is 21. Holgate is also 21. They’re kids. They are learning, they’re developing, they have raw talent that will be coached to excellence – and just remember that they’ve only had the benefit of their new coach, Silva, for a little bit over 2 months. I genuinely wonder if one of the reasons Lookman wanted to ply his trade in Germany is because they don’t get on their player’s backs as much as we do. Is it an Everton thing? Or is it, as I hinted earlier, also something in the ‘have-it-now-Society’ that we live in. Most probably it’s both.

I firmly believe in the development of our young players, and we have to play our part. What help are we giving our future talent to take away for 2 weeks before they play against West Ham if all they can remember is the moans and groans on match day, and the bitter accusations on Twitter. If you’re one of those giving them a hard time, just ask how this helps, and in particular, ask yourself what other options does the Manager have than to play these lads, and we should focus on getting the best out of what we’ve got, rather than wishing for something injuries and match fitness are at least temporarily denying us.

One player that stood out amongst all this, was Kurt Zouma. My, my, he is, as my Dad used to say, with typical understatement, “a unit”. But he’s pretty quick, no one is going to get around him quickly, and no one is going to want a 50-50 with him. And he played the ball, both feet I noticed, and linked up well with Digne and to some extent Holgate. I thought Zouma was superb yesterday, undoubtedly MoftM, even if he didn’t have a massive amount to beat. I think he’s going to be superb for us, and who knows, with Mina, eventually, unless he turns out to be a mirage, could be a formidable back line.

I’m slightly (*very) concerned that zonal marking doesn’t appear to include the centre of the 6 yard box, handing now Phil Billing and Danny Ings the freedom of the pen to end scoring droughts. I’m all for a system, not a fan of zonal if I’m honest, but I’m an old codger retired from a Marketing career, and not a qualified football coach. We can all see it isn’t right, and the measure of Silva will be how quickly and how effectively he tackles it. It needs to be now.

2 thoughts on “Obstructed View – Reflections on the Huddersfield (H) Game”