I’ve had a whole summer to think about new themes for 38 more Obstructed Views, and yet this one came to me in flash this morning. That makes it really good. Doesn’t it? 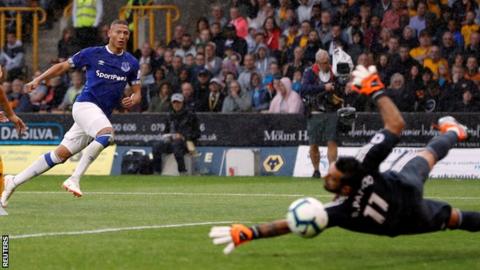 Image from BBC.co.uk – thanks chaps

As I stared in to my wardrobe this morning, as I have done most mornings over the summer, I suddenly realised I had a Jagielka, a Richarlison, a Pickford, a Keane and a Baines. Tenuous links anyone? Yes, but hear me out.

We’ve probably all got a Jagielka. It’s a T shirt you’ve had for ages, it used to be soft and new, but now it can be a bit crispy and maybe has the odd hole, and it’s probably time to throw it out and bring in a set of new T shirts. But I can’t do that. When a T shirt has given me such excellent service over the years, I recognise that it’s seen better days, and new T shirts will indeed come along that I will find even more comfortable, but I can’t just throw the Jags out. So I keep it, and who knows, maybe use it when I’m clearing out the Carabao Garage or doing the early rounds of the Emirates Cup Gardening, especially if it’s only light weeding needed. We can all see the flaws in this analogy, but hey, we don’t all come out of pre-season firing on all cylinders, do we?

My view on Jagielka the human? Clearly, we all know, he knows, that he’s at the end of his career, but I can’t bear to read people who say “hopefully that’s the last time we see Jagielka in an Everton shirt”. It may be, who knows, but less of the triumphalist glee in saying so please. A player who has been a rock of Everton’s defence for the last 11 years deserves more respect. Life moves on, we all know that, as I recognise every day as it gets harder and harder to lift myself out of the armchair and drag my sorry arse out for a run, but be thankful for his service, nor scream abuse at the man. He is likely to take more of a backseat now, but I suspect his influence behind the scenes will be immense.

Some said I paid far too much for my brand new Paul Smith T shirt. I may even have ruined the T shirt market by spending such a vast amount on a T shirt, no matter that I could have spent twice as much on a pair of Spanish or Brazilian flip (hopefully) flops instead. But then you wear that new T shirt, and everyone says, “wow, great T shirt, I reckon you’ve got a bargain there”. Richarlison is that T shirt. What a player he was yesterday. Driving forward, flicks and tricks in moderation, only one over-dramatic fling to the floor (perhaps Stevie P will teach him how to show you’ve been fouled with less of the Tom Daley), a danger in the box from headers and stab homes, and of course a sublime second goal, the like of which we haven’t seen at Everton for years (not scored by us anyway). Or even for ever. Typical Everton, you wait ages for a Brazilian to replace Jo, and now two come along at one. Just imagine Richarlison and Bernard on the pitch together. And we should also mention how he tracked back and put in a real shift defensively, as he did at Sour Grapes FC, an all round top drawer Everton Premier League debut. If all the new signings do as well, we’ve got a hell of a season ahead of us, and no one will question what we paid for the T shirt.

Also nice to see he CAN smile. Photo from Goal.com

There are some T shirts that you think have been worn rather too much over the summer. Perhaps a rest would do them good, and then you remember that they’re inanimate objects and things don’t work like that. But you still think that if you’ve worn a T shirt so much, it might just need a bit longer before it comes out of the cupboard. For me, unpopular opinion though it will be, I would have had Stekelenburg in goal yesterday and kept Pickford back for when he’s picked up more sharpness in training. Despite a great save from Jimenez, he showed a rookie error shifting the wrong way for Neves’ free kick (which was taken so far forward from the foul that it was almost in the box), and I think a Pickford on top of his game would not have made the same error. Mental tiredness is one of the great unmeasurables in the modern game, but after an amazing season, a World Cup Semi Final, and only a 3 week break, that can’t be enough in my book. You want your best XI on the pitch, and he’s undoubtedly in that XI, but I think that mistake showed mental fatigue, not the ‘keeper instinct that closed Jimenez down which was excellent.

There are always a couple of T shirts that you have that you think you’re not going to wear anymore, one because it was expensive and doesn’t look as good as you thought it was, and one that you’ve had for a while and assume it’s looking old and frayed (see also ‘a Jagielka’). Michael Keane was the former, and Leighton Baines the latter yesterday. Keane arrived as the next big thing and future England CB, more reliable than Stones, and a tough and uncompromising defender. Most of last season he did everything he could to prove that theory wrong, although there were signs in the last 10 games with a settled partner, he’s still got great talent. For 80 mins yesterday he confounded the ‘haters’ and played exceptionally well, and rather than applaud the excellence of Neves’ cross or Jimenez’ skill at backing off Keane just that extra foot or so to give Neves his target, too many people were quick to blame Keane for getting sucked under the ball. He did well yesterday, and his 50 odd minutes alongside Holgate gave us a not completely rosy picture of a CB partnership that might have been in a Mina-less and Zouma-free world, but enough to know that we have dependable back ups should the Brave New World not look quite Brave enough. How quickly Mina and Zouma assume the CB pairing  we’ll see, but all of a sudden, life with Keane doesn’t look quite so bad after all. How his game will develop if he’s a perma-sub will be interesting.

I suspect Baines himself has old T shirts he still loves to wear. I’ve got a few. They’re not ready for the Garage or Gardening jobs, and they’re too good to be transferred to my son’s “I’ll have that” pile. Get your own T shirts pal. No, you get it out, you stick it on, and you think “yeh, still good”. Baines was that T shirt yesterday. Given that virtually every Wolves attack went out wide, it is interesting that much less threat came from them than we might have expected, given the flaws exposed by Blackburn, Bury and Valencia (possibly the only time Bury and Valencia have appeared in the same sentence you’d think, but then you’d have forgotten the two Bury Neville lads and their ill-fated Valencia excursion two years ago). I think Baines and to a lesser extent Coleman can take some credit for fewer crosses raining in, allied to Wolves reluctance to take their chance. But Baines was ok yesterday, and I suspect will keep Digne waiting that little bit longer.

Enough T shirts. Final word for Marco Silva, who, armed with most of the same personnel that Big Sham had to work with, managed to get a considerably better tune out of them than Allardyce ever would. We had shape, we had purpose, we had drive, we had resolve and fight, and in Richarlison we had an absolute gem. And we had a Portuguese manager that was more articulate in English than his English predecessor.

Let’s hope he continues to ruin the T shirt market.