Come on Crombie, crank it up for just a few more games, two to go after this snore-fest to be precise. OK, not that dull a game, but hardly one to get the pulses racing. We’ll feature Idrissa Gueye scoring, just because of the novelty value….. 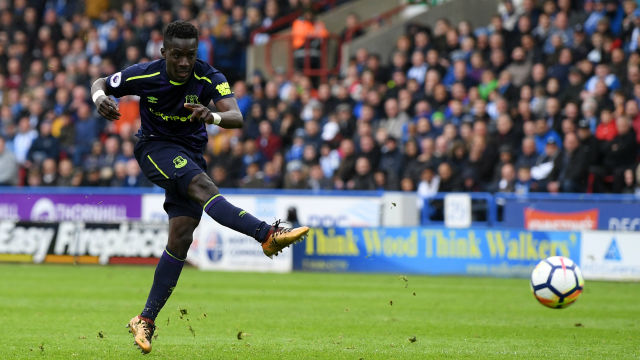 Good goal it was too. However, the photo, courtesy of aol, underlines why he scored: combined with his excellent technique, there was nobody anywhere near him, not no one, nowhere near, nuffink. Still, well taken Idrissa.

Huddersfield was the side I said at the start of the season “would surprise a few people”. In a sense, they have done, most recently, surprising people that they can’t score, and can’t seem to stop others scoring, which, in the grand scheme of things, is not a recipe for success. Their forwards looked heavy, cumbersome, and lacking any kind of guile, and a completely missed header by Schindler, and a comical cock-up by Pritchard kind of summaries their woes. This is why I find it hard to get over-excited about a back to back win, despite its rarity this year, when frankly there were many occasions when the space we gifted our opposition should have been punished, and of course would have been if the quality amongst the Terrier ranks had not been so lacking.

In essence, I thought we were poor, but Huddersfield were poorer. But we won, and I could hardly disguise my surprise at that fact, especially when you know just how badly Huddersfield needed a win given final fixtures against Man City, Chelsea and Arsenal, none of whom are likely to feature in the “generous” category. Perhaps Huddersfield just tried too hard. We didn’t. We did ‘just enough’ and frankly, that’s not good enough.

And here’s the rub. I am firmly of the belief that Allardyce should not be our Manager. Apparently, according to friends, football pundits and journalists, I should be careful what I wish for. Remember this side, that side, any other side, that dispenses with a manager that is capable of getting results. We want more, hence our motto. We want to win games and entertain. So, as it it happens, do Man Utd, another focus of fans ire despite likely to finish second and may even lifting the FA Cup. We’d love to be there, but doesn’t stop Utd fans complaining about Mourinho’s tactics does it? They’re used to winning, fine, but winning in a particular way, and they’re not doing that. Or we could look at Arsenal. “You should be counting your blessings” we say when they moan about Wenger; well, yep, great track record, but they don’t do it against Stoke away on a Tuesday night in February (although to be fair, neither do Stoke). So the fans moan and dead a change, which indeed is coming.

What we want, media types, and my friends who suggest I shouldn’t be negative, is to win and win playing great football.

We’d like a team capable of doing that, and that requires a manager that’s capable of setting us up right, and coaching in to players the kind of mentality that is clearly evident at the RS and of course a little further east along the M62, as well as selecting players who have the ability.

“What would you choose – win, or lose playing well” is the daftest question we get. It isn’t optional, because these aren’t the choices we get, and therefore the choices we could make. It’s about sensible recruitment to a plan that will work under a structure that supports it. At the moment, we have a Manager selected for the England job (before he was allegedly sacked for allegedly having his fat thumbs in the alleged gravy train/boat) because, and I quote, “He’s never managed a team that’s got relegated”. Well, whoopy do. There’s aspirational for you. It may have been good enough for some, but it isn’t good enough for Everton. The results have come in, and I’m delighted we’re not going to be relegated, but I’m furious we’ve played like Zombies against top sides, played like buffoons against Burnley (also now a ‘top side’), Swansea, West Brom, Bournemouth and Watford, and barely broke sweat when just about beating the likes of Stoke, Leicester, Newcastle and now Huddersfield. It’s not good enough.

It’s our motto for a reason:

One thought on “Obstructed View – Reflections on the Huddersfield (A) Game”