Now you’re not telling me you though there’d be a different featured image are you? 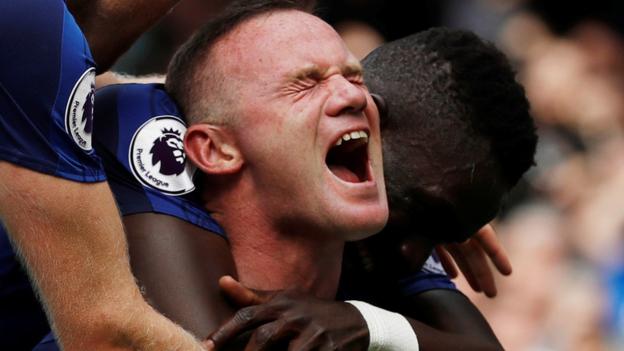 On my dull-old drive up to Goodison Park, I stopped to spend some of my hard-taxed earnings at another company that pays all its UK taxes, Starbucks. I bought a salad actually, don’t judge me, it’s been a tough week of alcohol, bad carbs and stuff, and the plan was to eat it when I got to park in L4 (keep with this, it’s really clever, honestly….). All fine, easy journey, M6 the usual drag, but parked up off Walton Lane and reached for my salad, all middle class couscous and pearl barley, roasted vegetables, and some wild rice for good measure. They’d run out of chicken.

Right. No fork. Can you see where this is going yet? It was immediately apparent that if you want to get a job done, like eating a salad, you need the right tools of the trade. A fork, in this instance. Fingers it was then.

Propel me forward to the Fan Zone, and the team news…..(got it yet?)

No right back. (Surely now?). Instead, we had a Right Wing Back, only we didn’t, we had a Centre Forward masquerading as a RWB, and unsurprisingly it didn’t work. If you’re going to play 3 at the back, you need a RWB, so you play someone who is the right tool (don’t) to do the job, so you play Martina, or you don’t despatch the Fans’ Favourite Right Back Jonjoe Kenny (that most have never seen play) to Dagenham and Redbridge the night before to play for the U23s against our new best friends, West Ham, and play him instead. In fairness to Koeman, he admitted he got it wrong, and despite being ahead by that stage, he made amends at HT, and the performance improved immeasurably, which frankly was the only option available if it was going to be different to the first half, which was turgid (that’s like turd, but more letters, same meaning). Despite what many of you have written or read on Twitter, that bastion of independent and accurate reporting, Martina was OK; maybe no Gary Stevens or Seamus Coleman, but he seemed solid enough to me, a couple of ‘mares, but also some good support up the right, and a few forward balls to whoever had wandered out wide, usually Rooney, occasionally Calvert-Lewin. Not sure I fancy the prospect of Sane, Sterling, Jesus, or Aguero picking the ball up and running at him next Monday, but we’ll worry about that another day.

Talking of tools to do the job, let’s talk Jordan Pickford. I remember some of my friends saying “yeh, but if it wasn’t for Southall, you’d have lost”. Factually correct, but a fatuous comment nevertheless; unless I missed the briefing notes, you’re supposed to have 11 players, one of whom’s job is to save the football, and stop it entering your net. That’s their job. And in Pickford, one of the busiest men in football in the last 2 seasons, we may just have a player.

I can’t find a photo of his dramatic last minute flying save from Stoke’s own Hobbit, Shaqiri, whose hips didn’t lie (indulge me….) as he advanced on goal and let fly, the ball arrowing to Pickford’s top left corner. But a leap, and a magnificent save (arguably, with his wrong hand as he tipped it past with his right hand not the left), and 3 points secured. I’m not saying Stekelenburg or Robles wouldn’t have saved it, but you can only praise the man between the sticks, not wonder what might have been. It was about the only shot he had to save, but he also stopped Crouch’s stabbed effort (that would have been ruled offside) with his spread body, punched when he needed to punch, caught what he needed to catch, commanded his area to underline just how some ‘keepers don’t (e.g. Mignolet), and let’s not forget some fine sprayed passes out wide to DCL and Martina. A fantastic first GP performance in the pressure keg of the Premier League. Some wondered what he’d be like if he wasn’t kept busy all game like the Sunderland back line obliged, and you only need to see that leap in the 90th minute to get your answer. On the basis of yesterday, and I’m not extrapolating from one game forward for ten years, we do indeed, have a top No1 ‘keeper. 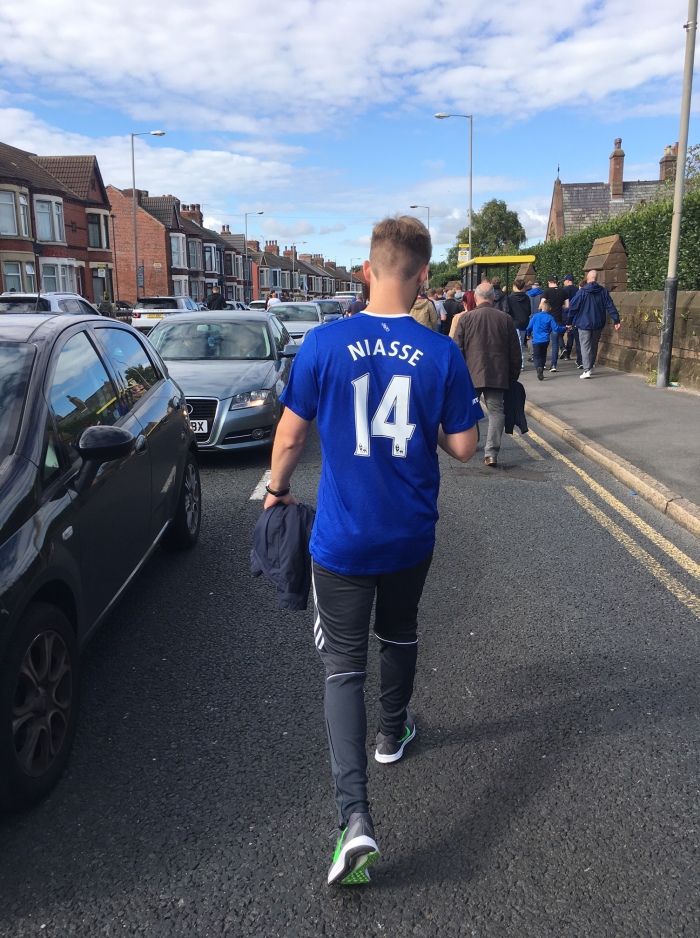 Sorry, no, not him, either the shirt wearer or the subject matter. I mean Dominic Calvert-Lewin. Read on before you blow your gasket….

If you’re just 20, you’ve scored the winning goal in an U20 World Cup, and the winning goal in a Europa away leg, and some fans liken you to a young Graeme Sharp (in the way you play, not the way you moan on the pitch), and if you’ve just demonstrated in a tough Europa League tie as well as in a friendly or two that you’re a decent central striker, then if you’re Dominic Calvert-Lewin, forever short-handed to DCL, you’d be forgiven for thinking you’re not quite getting the rub of the green. But he’s already played a dozen or more times for Everton, you’ve featured in The Times last Saturday as one of the crop of excellent English players at Everton, and the manager clearly thinks enough of you that he has asked you to do things you’re not used to doing, or not at least always playing to your strengths. Don’t get me wrong, DCL is NOT the answer to “who is going to replace Lukaku”, but he may well be part of the answer, and I’ve seen enough to suggest he may be a top rated striker in the next 2-3 years. Part of his education will come from playing alongside Rooney, who will no doubt have offered him some “feedback” for not pulling the ball back on a couple of occasions, but give the lad his due, he’s got an eye for goal, and he may well have that selfish streak that strikers need sometimes. He has got a LOT to learn, but the doubters must surely be reappraising their views after yesterday, and indeed the last few weeks. No doubt in my mind, that based on what we have, DCL central with Rooney and Sandro either side, is our best combination. We will probably sign a striker to supplement these three, but in DCL We Trust for the time being, and even if/when that happens, he will continue to learn and improve.

Whilst many of yesterday’s plaudits focused on Rooney (nothing more I can add frankly, except perhaps to say if Barkley had shown that second half performance we’d all be on Cloud 9 about his vision and early, probing passes), Keane (solid, dependable, even if a bit toothless….), and the irrepressible Idrissa Gana Gueye (nothing new for us there), one player who barely got a mention was Sandro.

It was his exquisite turn, drag back and pass that set up Calvert-Lewin to cross for the goal, and his performance also showed boundless energy and movement. But we didn’t exploit his strengths. Perhaps we’re not used to having a striker that moves as much as him, but frequently he pealed off his marker and was in acres of space on the left, only for the ball to go right, or down a cul-de-sac in the middle. He pulled defenders away, he created space for others as well as himself, but didn’t get the service he will need. He clearly needs ball to feet, not being the tallest of players, and not unlike another Spanish U21s “magic” player we know (and not sure Arteta ever headed it much either) he doesn’t quite look like a header of the ball, in the mould of, say, an Andy Gray. Get it out to him early, let him run at the opposition, he’ll put the fear of you-know-what in to them. But use him, play to his strengths, not his weaknesses.

That’s me done for the first of 38 of these blithering post-match reviews (not likely to do Europe or Cup games). Feedback always welcome on what you think, but be nice, even if you disagree. Too much hate in the world as I write this.

4 thoughts on “Obstructed View – Reflections on the Stoke (H) Game”