Another draw in a game dominated for large periods, another goal for the prolific Lukaku, but another two points arguably lost, another goal conceded to a set piece, and naturally another string of rants from Everton supporters. 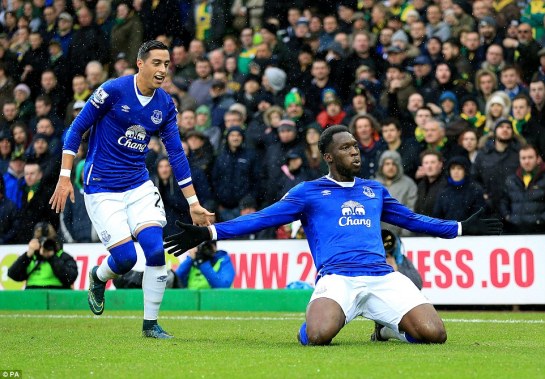 Whilst the fluffing of his lines on two further occasions might worry some that the “prolific Lukaku” played himself out of form at Carrow Road, two additional near misses which go down as ‘off target’ in the same way that Baines’ thunderous right foot shot is technically ‘off target’, but also any shot more likely to concern the inanimate corner flag than the ‘keeper, we have to remember the perspective that Rom is getting 5-6 chances a game, and you can’t ask for more than that for any top striker. His conversion rate yesterday was a matter of concern, primarily because other players didn’t convert gilt edged chances (step forward Arouna Koné and Gareth Barry), or because others didn’t choose the right options when team-mates were in better positions (step forward Gerard Deulofeu). A quick glance at the League Table shows that this ‘wasting of chances’ has still managed to put us 3rd in the ‘goals scored’ column as I write this, and our lead striker is the second top scorer so far; but the failure to convert of some of yesterday’s opportunities is brought in to stark relief when you also look at that Table and see 10 other sides have conceded fewer goals than Everton, and 2 others the same. But now is not the time to waste on our inability to defend balls in to the box.

The great news is that Lukaku is scoring goals, and creating chances, both for himself, and for others. The concern is that overall, the team should have been out of sight by half time, and yet we almost lost the match. How can that happen? It is no point saying we need to be “more ruthless” in front of goal, or that we need to “put the game to bed”, because that’s just stating the blindingly obvious. It is also not about querying the Manager’s tactics, as those same tactics got us in to the position to miss a hat load of chances. If we’d have been 3 or even 4 nil up at half time, it wouldn’t have flattered us, and Roberto would have been hailed as one of the best Managers we’ve ever had for blending the obvious talent of youth and experience, and for playing a brand of free-flowing football that at times had us standing in applause just for the quality of the approach play.

No, for me, the issue is far simpler. The players who had the chances to score weren’t good enough on the day. I’ll excuse Gareth Barry for a moment as he must have had a nose bleed being that far up the pitch, and we don’t expect him to score. For all his industry and the way he helps his fellow striker, our beloved Ivorian should really have done better with at least one if not both of his chances when 1 on 1. Credit to Rudd of course, who looks a decent keeper by the way, but chances like that need to be buried. Is Koné the best we’ve got? Arguably yes, although my suspicion is that Naismith would have scored, but may not be the better all round player, and we don’t have the luxury, NFL style, to bring on a ‘special team’ when you get a chance like that. Chip the keeper, play it underneath him, but of all the places that give the keeper the best chance to save it, Arouna found it. And we’ve seen Naisy finish chances like that before.

My clarification is ‘weren’t good enough on the day’. But apart from his hat trick, Koné’s goal count looks a bit thin. He’s not being asked to play as an out and out striker, but he surely would be if Rom got injured, God forbid. On yesterday’s evidence, he’d be some way short of where we’d need him to be. Naismith provides the obvious cover, but the lad can’t get on the pitch at the moment, and may even be departing the Mersey shoreline soon if we choose to interpret Roberto’s words that way. And we’ve got some jolly fine kids in the U21s and even U18s, but no-one is suggesting that any of these are ready to step up. We only need to look at the struggles of Bamford or Powell to see that there is a gulf between excellent in the junior teams or scoring for fun in the Championship, and making the grade in the Premiership. Whilst Lukaku isn’t much older than these lads himself, nor our own crop of youngsters, I can’t see the likes of McAleney, Rodriguez, Brewster or Connolly making the bench any time soon, let alone providing the goals to support Big Rom.

I’m not sure where this meandering is taking me, perhaps that’s why it’s called ‘meandering’. You can tell I’m frustrated, just like many if not all of us. Three wins from the last 3 games we’ve dominated rather than 3 draws would have us on 29 points and in 4th place. Just let that sink in.

These were games we needed to win, not allow plucky opposition to sneak draws. We’ve now got the current League leaders, a tricky away jaunt to Newcastle whilst the Turkey (or Nut Roast) is still digesting, our old chums Stoke at home, and then an unbelievably tough January to navigate. It’s going to be a time to look back on November and December as opportunities lost, however well we do in early 2016.

4 thoughts on “Obstructed View – Reflections on the Norwich (A) Game”