When Ryan Ledson was named on the substitutes bench against Southampton at the end of Roberto Martinez’ first season at Goodison it appeared the local boy, who was just 16 at the time, was set to fulfil the dream of every Evertonian and become the next academy graduate to force his way into the Everton first team. Since then, despite making his debut in last season’s Europa League, it appeared from the outside that his progress has stalled, with Ledson even finding himself out of the England u19 set up. On the back of a recall to the England u19 side, Ledson received the opportunity to gain vital football league experience with a loan move to Cambridge United, we sent a spy along to see how his debut would go. 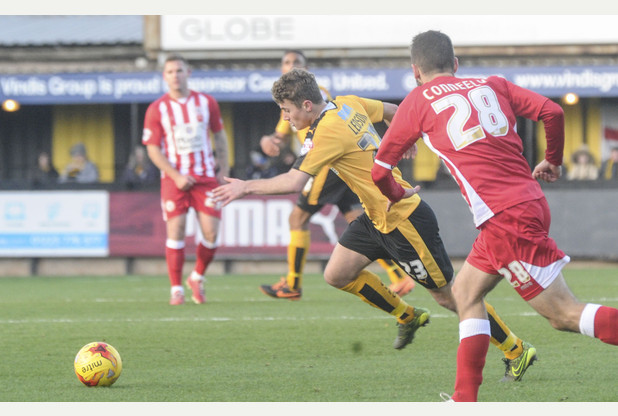 Despite losing the game (3-2 to Accrington Stanley), Ledson was very impressive. The local paper (who voted him man of the match) highlighted his influence on his teammates and this was certainly true. For a player who is only recently 18 his maturity was incredible. He was cajoling his teammates, ensuring they were picking up markers at corners and free kicks. There were times, particularly when the game started to get away from Cambridge, where you could audibly pick up his instructions to his midfield colleagues.

On the ball he was neat and tidy and used his vision to good effect. He also loves a tackle and wasn’t afraid to get involved in a couple of midfield tussles and at times his work rate was phenomenal. He was very unlucky not to score, a long range effort from 30 yards out, after a clever turn into space, was well saved by the Accrington keeper who dived low to his right to deny him. He completed the full ninety minutes and although he tired towards the end, there was no way that new manager Shaun Derry could afford to substitute him as he was one of the most impressive players on the pitch.

Next up for Ledson and Cambridge is a trip to Morecambe on Tuesday night, before a home match against Notts County on Saturday.