He’s only gone and done it again hasn’t he? 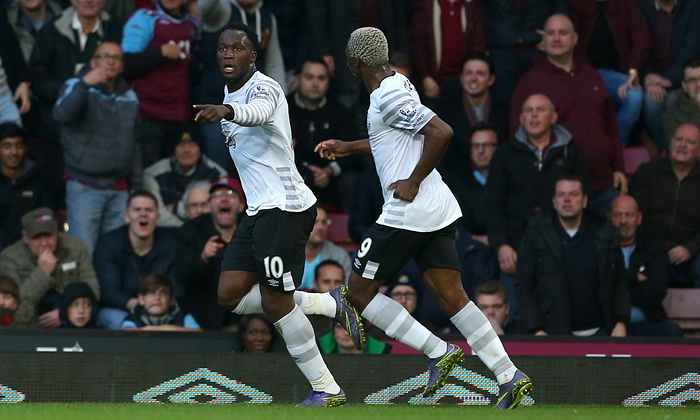 Think Lampard. Think Rush. Then think some more about a player (or several) who “always” scores or scored against Everton. Got it? How does it feel? Yeh, rubbish, but when the fluorescent boot is on the other foot, that’ll be how West Ham fans feel about Romelu Lukaku, who scored for the 7th game in a row against the same opposition, ensuring for at least one reason the Big Belgian will be in the Everton record books alongside Dixie Dean who last achieved the same feat. All we need now is for Rom to score 60 goals in a season. Simples.

With a goal bearing a striking resemblance to his effort against Sunderland, Lukaku quickly cancelled out Lansing’s wonderful goal, taken with aplomb, about 15 minutes earlier. Once again, the vision and the eye-of-the-needle pass came from the mercurial Deulofeu, who did OK in spurts today, but was withdrawn once again, this time for Lennon, as Martinez sought more consistency and defensive back up than the little Spaniard was likely to offer up in the closing stages. What is massively encouraging though is the way Deulofeu, and indeed Kone, are trying to give Lukaku the service he wants. Whilst Rom’s hold up play has improved this season, I’m much keener on seeing him running in on goal than with his back to it, and the striker did ok today. Not his stellar best maybe, but a goal, and a sound all round performance.

Given what we’ve seen in recent weeks and months, to enter yet another International break without the image seared on to my brain of Everton conceding a headed goal without the defence anywhere close, is a significant achievement. The omens weren’t good, with Carroll up front (but hardly looking match fit), and players with the creativity of Payet (oh why didn’t we buy him?) and Lanzini (I’m sure I saw some of this selling for £2.99 in my local shop) able to exploit the space normally left by the benevolence of the Everton defence. Instead, we had a towering performance from John Stones, who seemed to have shaken off some rustiness of late, and completely dominated the defensive barricades and repelled all borders. One of the things Evertonians are going to have to get used to, is that we have a lot of youth in the side, and with that can come exhilaration, but also inconsistency. When you’ve got teenage stars like Galloway, or early 20 somethings like Stones, Lukaku, Deulofeu and of course Barkley, much though we wish it were not true given how much money they’re earning whilst doing it, there will be times when they’ll frustrate us as they won’t be able to turn it on week in, week out. It’s a reality of life. My teenage and early 20s are something of a distant memory nowadays (I know, I know, I do still look that young, but trust me, I’m not), but I have the benefit of a son and daughter in their 20s who remind me what life was like for me back then (when men were men, and sheep were scared), and the right blend of youth and experience is the Holy Grail that we need to search out.

Thankfully we’ve got the youth, and in someone like Barry, we’ve got the experience. He was superb again today, and whilst other old timers in the squad are starting to creak a bit (step (hobble) forward Howard and Osman), Barry seems able to turn in strong performances week in, week out. It mystifies me why some supporters get at him, and bemoan his presence in the side, preferring it seems a combination of Besic and McCarthy; trust me, I think that’s the future, but whenever we’ve seen that combination to date, it’s not turned out well has it? Barry is always in the right place, almost always at the right time which is handy, but some focus more on the odd misplaced pass rather than the all round good work he puts in. You always notice when he doesn’t play.

Stones will probably benefit from putting his feet up during the International break, as Roy will probably favour a Smalling/Cahill combo. And one other player who could do with a bit of a breather is our diamond called Ross Barkley. Today he looked knackered, tired in limb but also in brain, a feature occasionally at Goodison last week, as his intended passes looked all too obvious and were frequently intercepted. As per the comment above, he is young and he’s still learning, but if we had a ready made replacement, then Roberto would probably have rested him before now. Perhaps the imminent return of Tom Cleverley will facilitate that – hardly like for like, and more ‘steady as she goes’, but we’ve got to find a way to keep Barkley fresh and not expect him to rip teams apart every single week. Maybe Mirallas can do a job more centrally, he’s been there before for both us and Olympiakos, and some shuffling of the pack is essential if we’re going to get the best out of the superb young talent amongst our creative midfielders.

Two weeks off for us now, and a lacklustre Villa to visit Goodison on 21st November, A gap is opening up a bit between us and the top 6 or so, and a win and continued momentum is essential if we are to bridge that gap and keep ourselves in contention in this anyone-can-beat-anyone-else season.