One. Derby underachievement continues. I, like many other Evertonians left Goodison Park slightly disappointed on Sunday. Not because Everton had played poorly, but because we had yet again missed the opportunity to beat a distinctly average Liverpool side. Our record against the Red’s since the start of the 2006-07 season now reads played 22, won 3, lost 9 with 10 draws. In that time Everton (average finish 7th) have finished on average 2 places behind Liverpool (average finish 5th) and for two teams so closely matched, the Toffees’ record should be far better. Looking at the Liverpool team that took to the field yesterday you would struggle to find more than 3 Liverpool players who would force their way into Everton’s strongest eleven, yet as they seem to do in the derby, the Reds found a way to manage the game away from Everton.

Two. Martinez continues to answer his critics with Everton set for a strong season. There were many calling for the managers head towards the end of last season, but the Everton board remained steadfast in their backing for the manager and this has been rewarded with a solid start to the season, leaving the Blues in 7th position (only 3 points off 2nd) and ideally placed for a tilt at the European places come the end of the season. Everton’s league position is even more impressive when you consider the tough list of matches thrown up by the fixture computer, with Everton now having played 6 of last seasons’ top 8 sides. The games don’t get any easier in the short term with Manchester United and Arsenal the next two matches after the international break, but the Toffees then face a run of winnable fixtures in the run up to Christmas.

Three. Defending corners has to improve. The last two goals the Blues have conceded have both come from poorly defended corner kicks. Last Monday night, Craig Dawson was able to get free of his marker and head home from as little as two yards out and again on Sunday Danny Ings was presented with a free header, virtually on the goal line to head Liverpool in front. On both occasions it was Ross Barkley’s man who was able to free themselves and head home, maybe a rethink on his position on corners? Or maybe, just maybe Tim Howard should have come and collected a ball that was virtually under his crossbar! 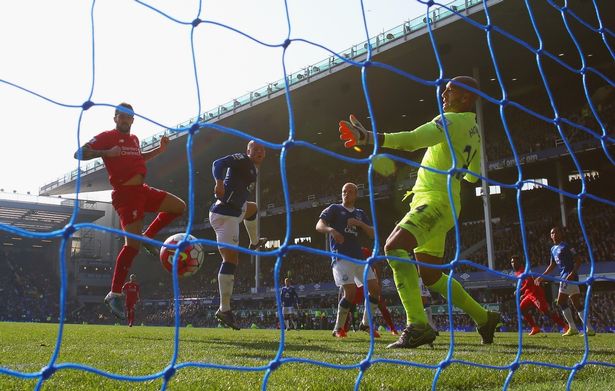 “He does not have the quality, the pace or the physicality to survive in the Premier League.

Well Mr Vickery, you have made a huge error of judgement. It may well be early days, but it is already plain to see that Funes Mori has all the physical attribute to be a success in England’s top division. Strong, powerful in the air and certainly not afraid to tackle. As for pace, he is no slouch and on Sunday demonstrated his ability to cover his defensive colleagues, racing across the Goodison turf from left to right to deny Danny Ings a clear run at goal. Finally he looks to fit perfectly into the footballing philosophy preached by Roberto Martinez. Comfortable on the ball and happy to play out from the back.

He is not the finished article however and still has a few things to learn. Some of his balls across the backline carry an element of risk and significantly increase the heart rate of the watching Evertonians. He was also partly at fault for the West Brom opener in last weeks Monday night football. Despite this I doubt you will find Martinez criticising his defender for attempting to play the ball out from the back. All in all a good start to his Everton career and the signs are certainly encouraging.

Five. Young guns shining bright. The Everton team on Sunday was scattered with young exciting talent. Browning (21), Galloway (19), Barkley (21), Deulofeu (21) and Lukaku (22). Let’s not forget that McCarthy and Funes Mori are only 24 and that missing due to injury was John Stones (21) and out on loan another exciting defensive talent Luke Garbutt (21).

Roberto Martinez has often spoken of a golden generation since taking the Goodison hot seat, maybe we are heading for a truly golden period at Everton.