One – Money can’t buy you Stones or success. Throughout the match Evertonians could be heard singing money can’t buy you Stones but Spurs are evidence that money doesn’t necessarily buy you success either. Everton and Spurs are the best of the rest when it comes to the history of the Premier League, not quite good enough to compete for regular honours or Champions League football but always up around 5th, 6th and 7th position and the teams as they were yesterday are extremely well matched.

Yet the similarities end just there, Spurs have spent £533m in the last 10 years compared to Everton’s total spend of £197m and the evidence on the pitch would suggest that neither approach has been particularly successful in progressing the teams and enabling the two historic giants of English football to mount a prolonged and serious challenge at the top of the Premier League.

Two – Too early to write off Tim Howard. It would be extremely easy to write off Tim Howard and suggest that the American international is finished as a top class goalkeeper. His performance against Manchester City last week was inconsistent, making good saves in the first half, yet at fault for City taking the lead when he was easily beaten at his near post. I too was very critical of the American in this column, however on Saturday Howard was back to his best, denying Spurs throughout the 90 minutes with save after save. Ok Spurs were at fault with some wasteful finishing and I am sure a better team would have punished Everton, yet Howard provided enough evidence to suggest he is prepared to fight for his future and that it remains too early to write off the experienced keeper. He was excellent and fully deserved his man of the match award and for me remains Everton’s number one.

Three – Everton need to find the balance between playing it direct and a possession based approach. We have all noticed the improvement in Everton’s performance since they have started to mix up the possession based tactical approach favoured by Roberto Martinez with a more direct approach which has helped to quickly bring in Everton’s forward players. Yet at White Hart Lane the Blues failed to find the right balance. During the first half both sides were particularly disjointed, however after the break Spurs mounted the pressure and Everton failed to cope, punting hopeful ball forward down the flanks and towards the centre forward. 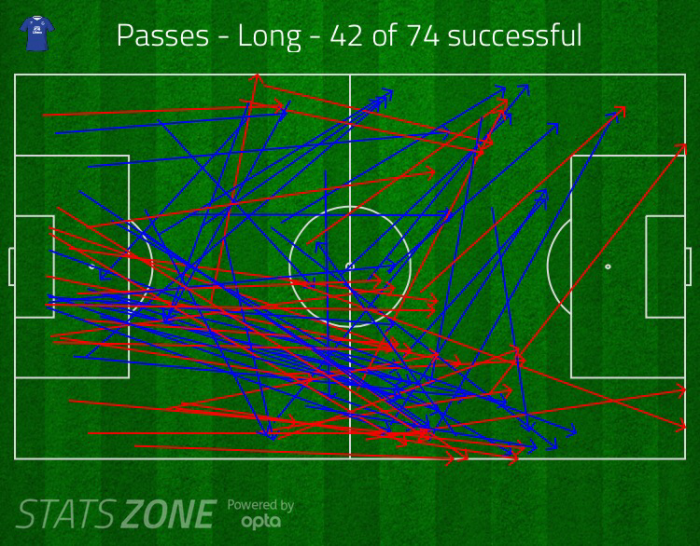 All too often Everton quickly relinquished possession and let Spurs increase pressure on the Everton defence. If Everton are to improve and become the team potential suggest they are capable of then the Blues need to know the right time to mix up their play.

Four – The search for a number 10 must come to a successful conclusion. With the clocking ticking towards the close of the transfer window Everton are still to recruit the creative number 10 that Roberto Martinez identified as his priority transfer target and it certainly showed in the stalemate at White Hart Lane. Everton had 8 shots all match with only 6 (does not include the two free kicks) of those opportunities created by a run or decisive pass. With such poor service it is no wonder Romelu Lukaku was frustrated when he was substituted midway through the second half.

Five – The Blues have rediscovered their resilience which will ensure a top 8 finish. This was a game Everton would have certainly lost last season. Roberto Martinez has even said as much himself.

“Last season, we would have lost.
“I couldn’t be happier with the overall display, and the focus and concentration. When the substitutions came on, they met the tempo straight away.”
“I was very satisfied because in this performance, we had to show a lot of character and a lot of personality – not necessarily with any technical or tactical aspect, but we had to make sure we showed good concentration.”

At times in football you have to dig out points, this is true of all teams, even those at the very top and if Everton are to break back into the top five or six they will need more resilient performances, especially away from Goodison Park. This was also Everton’s second clean sheet away from home in just the second league away game of the Premier League season. This is all the more remarkable when you consider Everton only managed two away clean sheets in the whole of last season.