1. Roberto was tactically perfect. I was slightly critical of Roberto Martinez’ tactical approach to last weeks draw with Watford, however during Saturday’s win over Southampton he got it right from the first minute to the last. There was more than a few murmerings when the team was announced, both in the stand at St Mary’s and on Twitter. The majority appeared happy with two up top, but were concerned over a lack of width. In reality Everton played with an unconventional 4-4-2, with Arouna Kone providing width from a right forward position and Tom Cleverley providing width on the left in a more withdrawn midfield position.

Southampton struggled to cope and were unsure how to pick up Lukaku in a more conventional forward role and Kone on the right. Both the Everton forwards had acres of space and combined brilliantly to give Everton the lead.

2. Jamie Carragher was right, “button it, shut up and give the kid a chance”. Without the pressure from an expectant Goodison crowd, Ross Barkley was ‘phenomenal’. He ran the game from midfield, using the ball well, running with it at the appropriate time and provided a cutting edge in the final third. He scored one, created another and in truth should have scored one more. In Ross Barkley we really do have a diamond, let’s enjoy and cherrish him!

“Barkley had a difficult season last season with the crowd, and at the game again on Saturday (Watford at home).

“Some of that crowd need to button it, shut up, and give that kid a chance. He’s got great talent.” Jamie Carragher

3. Everton are sensational on the counter attack. During last weeks first half against Watford we saw the worst of Everton, playing the ball slowly and with a lack of tempo. In contrast, this week Everton were happy to soak up the pressure and then break quickly and dangerously on the counter attack.

The break for Everton’s first goal came from a Southampton corner kick, Barkley picking the ball up deep inside the Blue’s own defensive third and starting a lightning quick counter attack that finished with the ball in the back of the Southampton net just 9 seconds later. 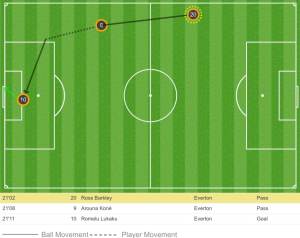 The second goal was equally decisive, Lukaku winning the ball on the half way line and setting Everton on the break with the Belgium powering onto the end of a Barkley throughball to finish powerfully past Stekelenburg.

With Everton facing top class opposition over next few weeks the Blues will have plenty of opportunity to play on the counter attack.

4. The future is bright. Everton’s thrilling performance is all the more exciting when you look at the ages of 7 of the starting eleven and 2 of the used substitutes. Roberto Martinez speaks of a golden generation of players and with several others pushing from the u21s and the likes of Mason Holgate and David Henan arriving on permanent transfer this summer Everton do have a very promising future.
Seamus Coleman (Aged 26)