Ok, ok, I know it’s a late post, and we have all gone on our holidays, come back, done the washing, and started to ready ourselves for a summer of inactivity in the transfer market, and here am I, far too late, writing about the last game of the much-to-be-forgotten 2014/15 season. Yeh, soz. 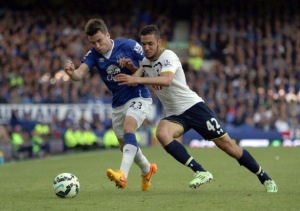 The truth is, I have a decent couple of excuses. Firstly, my view is not just obstructed, given I’m on holiday on the Suffolk Coast that seems to think WiFi is a new breed of a Japanese dog, but apart from Match of the Day and the unbiased burghers of Everton TV, it is a non-existent view of another woeful performance that created our 15th defeat no less of an undistinguished season. And that’s the second excuse. I’m getting a bit keyboard-weary of knowing how to describe something creatively when we’ve seen something all too often before. A half-arsed first half, a bit more intensity in the second, but a lack of any kind of cutting edge that can make good the cock-ups of the first half and no obvious chance to reverse the inevitable goal down situation. I’m also slightly bemused. I did in fact listen to the game through Snods and Darren Griffiths, who consistently described it as one of our worst performances of the season, but then Daz bemoaned our fate interviewing Young John Stones talking about all the effort we put in. Seems to me he must have been describing the effort put in by the fans, not by the players.

It is pointless me trying to pick over the bones of our 15th defeat (have I mentioned that yet?) of a wretched season, pointless carping on about our points total last season being enough for CL qualification this season, pointless bemoaning the lack of a trip in early July to Stromsgodhelpus or such like in the early rounds of the Europa League thanks to the Fair Enough Play League (good luck with that West Ham), and certainly pointless trying to fathom how a full international in Ross Barkley can have such a mystifyingly bad error-strewn first half that he gets substituted at half time “for tactical reasons” (in other words, we wanted someone who’d pass to a bloke in a blue shirt). It’s all a bit pointless, and if I’m honest I am a bit fed up with it, and just a little flat, but come Friday I’ll be ridiculously optimistic about next season.

Actually, I’d like to base that optimism on some players whose shine has not been tarnished of late.

Stones has been exceptional, and was again on Sunday. He will just grow and grow in stature, and with Jagielka, himself pretty strong these last few weeks, if a little at fault for Kane’s goal, he will form a massively strong central defensive partnership. Alongside them may well be another young lad coming through, probably not Garbutt as most had hoped, but Galloway; apart from a few misplaced passes in his two matches, which may be signs of over-confidence, the lad has looked strong and assured. And Coleman seems to be back to his best. More runs, plenty of tackling, and plenty of calling for the ball. Good lad Seamus.

At the other end of the age spectrum, Osman and Pienaar have enhanced reputations from their fewer appearances, and I agree with Martinez that we have missed their guile this year. Let’s hope they’re back fit in August then, as one at least will have to make it seem like a new signing. Barry again was solid, far stronger these last few weeks than the wobbly spell post Christmas, thank God.

What this means for the enigmatic trio of Barkley, Lukaku and Mirallas I’m not sure. Mirallas seemed intent on Sunday to score the spectacular, Barkley as I’ve suggested looked to be filling in for Spurs weakened midfield, and Lukaku looked completely disinterested. Not good enough lads, just not good enough. You have talent to burn, but this League needs you on top of your game week in, week out, not one in three. Luckily they HAVE got the talent, but we just need to see it being deployed more consistently.

Right, I’m off to build another sandcastle, and don’t even suggest there’s an Everton metaphor there….

2 thoughts on “Obstructed View – Reflections on the Spurs (H) Game”