After receiving dog’s abuse after last week’s OV on the Swansea game, after my unflattering views on Shelvey, I promise I’ll be nice to Burnley players this week. In truth, there was little to be unpleasant about after yesterday’s gentle ramble in the sunshine, as the only opposition player likely to have received any biased scrutiny, Barnes, was dismissed seconds before half time after two bonkers bookings, denying us a further 45 minutes to watch a player who has had his critics this season, but for the most part of the first half yesterday actually looked little more than ‘committed’ as opposed to psychopathic (I’ll gloss over his attempted swipe at McCarthy that got him his first booking and would have been straight red if he’d connected). Instead, the Snide Scrutiny can be reserved for our own Kevin Mirallas. 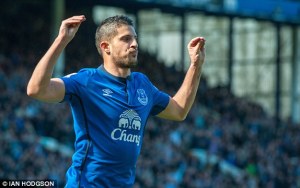 A well taken (eventually) goal, some superb runs, turns and jinks, were not the only feature of Kev’s return to the starting line up replacing who appears to be a somewhat brittle Pienaar , whom most Blues expected to see continue his comeback after a longer than planned sub’s appearance against Swansea. No, Mirallas also has his dirty side, and he was lucky to stay on the pitch after a late and dangerous lunge at George Boyd. We all know Mirallas has ‘previous’ in this regard, but some Blue tinted views tend to gloss over some of these, especially given how many of them were aimed at Suarez when he was over the Park. I’m all for tough no nonsense tackling, I like Besic for that very reason, and I’m also not averse to a bit of niggle that probably oversteps the law from time to time – the kind of thing that helps intimidate the opposition before they line up against us. But yesterday Mirallas over-stepped in an unacceptable way. In a Wenger-style “I Didn’t See It” I can honestly say that from my lofty position on Row Q in the Upper Gwladys, the ever-lovely pillar genuinely did obscure the incident from my first view. But you sense that there’s something amiss when a player goes down like Boyd did, and his team mates react as they did – not quite Chelsea style Ref berations, but enough to know that something wasn’t quite cricket, and the MoTD cameras and endless replays confirmed it. I don’t condone that kind of snide, and if you’ll forgive my pun, I’d like it stamped out. Whether it was for that incident that had Mirallas a moment away from making a second name for himself in the erratic and curiously-decisioned Mike Jones notebook, or the fact that he still can’t quite manage more than a 60 minute run out, Kev was subbed, and that could have affected the set up and the flow of the game, and not in a good way. If Mirallas stays, or even if he leaves, I hope he has a long hard look at this side of his game. Lennon has shown what speed and agility and twinkling feet can do not just going forward, but how also they can help dispossess the oppo and I’d rather see that than attempting to break someone’s leg. And yes, even if it’s Suarez. That aside, Mirallas contributed a good deal to another win, and again, a different shape to an Everton side on a dizzy run of 4 wins and a draw in our last five games. We have been yearning for a Plan B, and yesterday as at Swansea, I think we’ve seen it. And yesterday may even have been Plan B (subsection ii, article c, verses 24-35) if not quite a full blown Plan C. We saw the 4-1-4-1 in Wales last week, and it was on evidence again yesterday, but this time with the added excitement of genuine width on both flanks in Mirallas and the impressive Lennon, both of whom were given license to leave their white-line-hugging to move infield to outnumber and outwit the Burnley central midfield. Martinez had clearly done his homework, and must have expected Dyche’s boys to do as they were told (mind you, who wouldn’t obey Gravel Voice without question?) and high press the Everton back line, because the high pressers were then outdone repeatedly by clever balls ’round the corner’ in to the space vacated by the Claret and Blue front 3, leading to more direct surges on goal led by the impressive Lennon, or Barkley, or Mirallas. Even McCarthy had a few runs, and he must be feeling a bit disoriented at the moment given how much time he’s spending in the ‘other half’ of the pitch. In fact, the Everton midfield did a cracking job at finding space all game, and it will be fascinating to see our set up and tactics next week against Manure, who are likely to be a bit less accommodating, and are likely to test Howard at least once, which is more than Burnley managed. If Jones had scored, as he should have, just after our own comedy goal, things would obviously have been different, but I wasn’t convinced on yesterday’s showing that Burnley had enough to trouble us. I was expecting us to lose before the game, as their fight allied to our safety had away win written all over it, but my pessimism was misplaced because actually, we looked a decent side again. Our wealth of possession and 20 attempts suggests so, but so to did our intent in the first half, which admittedly waned a bit in a pedestrian second half where the intensity disappeared, probably with Barnes down the tunnel. Whether Wayne wanes next week, only time will tell. But frankly only 1 goal yesterday was a bit lame given our attempts stats. Special shout outs for yesterday to Lennon, again a bundle of energy and who gets bums off seats as he attacks full backs; to Barkley who showed some glorious touches and turns, but needs to shoot quicker and not try and beat every man; to Barry who bossed midfield and seems to be thriving in his new lone role; to Kone who at least tried, and we have to hope is going to return to his best eventually after this knee problem (remember Naisy?); and finally to Martinez, who for all his relentless and at times unbelievable positivity, has managed to inspire the team enough to not let the season dribble to a conclusion, but to get a few wins and close with momentum rather than being static or going backwards. Can he keep it going for another 5 games? We’ll see. Ross Crombie