At 2.04pm today I had little hope that Everton were about to break their jinx away at Arsenal, or frankly away at anywhere at the moment, and sure enough, two hours or so later, my not very raised hopes were not so much dashed, as confirmed. We’ll call them fears rather than hopes I suppose. 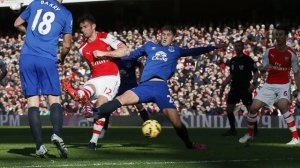 The pre match interview on BT with Roberto, when he said two teams would be playing attacking football, was the first thing that confirmed my view – we’re not going to come here and play expansive stuff, we’re going to come here and try to hit Arsenal on the break, a European away style performance. What came as a bit of a surprise was the amount of possession we had in that first half hour or so; what didn’t surprise me was how little we did with it. I’m getting a little tired of talking about a toothless Everton attack, especially as we’ve only scored 5 fewer goals than this time last year, but on this occasion we didn’t look like scoring until Lukaku and Lennon warmed Ospina’s hands (gloves) well in to the second half. There is little point having players with pace if you don’t play the ball through to them, but the one man capable of doing that at the moment it would seem – Gibson – was left on the bench, presumably as he’s nursed back to fitness. I’m no fitness expert, but perhaps he could have come off after 60 minutes against Young Boys and keep a bit more than 10 minutes-worth in his tank for Arsenal.

If we’re looking for positives, we can say with certainty that despite a 2-0 scoreline, Arsenal gave our back line little to get over-excited about. Sadly, we gave theirs even less.

However, we saw our marauding right back actually, well, marauding, a bit more – at last. Seamus provided a few of the highlights going forward, although the lack of movement ahead of him often meant he kept the ball and ended up in too many blind alleys. But much better from Coleman than we’ve seen for much of this season. And on the other flank, we needn’t worry too much about not having Baines in the side when we’ve got a guy like Garbutt, who defended reasonably well and went forward whenever he could, and delivered set piece balls that Leighton would be proud of – and his corners, that Baines would envy. But it would be an exaggeration to say we crowd the 6 yard box wouldn’t it? Anyway, let’s get young Luke a lucrative (ha ha) contract and get it signed sharpish.

Stones and Jags too were largely untroubled, perhaps Stones could have closed Giroud down for his goal, and perhaps Jags could have jumped over Rosicky’s tame shot that Howard had easily covered. Ifs, buts and maybes, a familiar tale this season.

I can’t summon up much positivity to describe the performance of the front three, and you’ve probably all said it anyway, so what more can I add. I’ll just say that I want Lennon to get a start ahead of the enigmatic and far too often disappointing Mirallas, and I can’t understand why Lukaku stays on the pitch when he perfumes like that, with Kone is itching to get on the pitch. Bringing on Naisy was something and nothing frankly.

Right, onwards. And where better to start than Stoke (and you don’t hear that very often do you) as we play another of our 3 away games in March in the Premier League. We had better start doing something different and better – and fast.