I, like many others, have been very quick to criticise Sylvain Distin this season. His performances have been well below the standard he has set over his time at Everton and unfortunately time does appear to have caught up with him somewhat. He has also been chastised for his surly response to receiving a reprimand from Roberto Martinez after a disastrous performance at Swansea in the Capital One cup. But on Wednesday night, as the rest of the first team squad travelled down to London to take on league leaders Chelsea, Distin remained on Merseyside to play alongside a couple of future hopefuls in the Everton U21 backline. 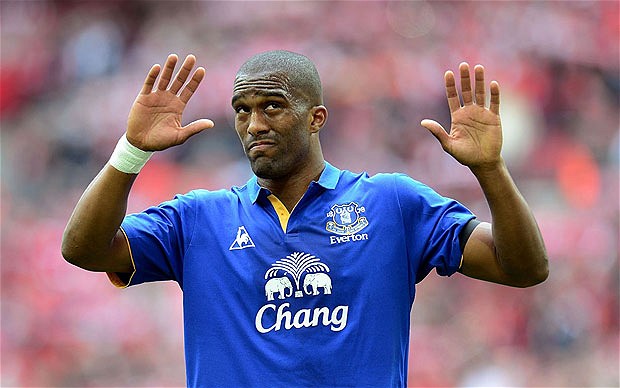 Everton u21 coach David Unsworth feels that the likes of Brendan Galloway and Jonjoe Kenny will have benefited hugely from playing alongside Distin, despite the Blues slipping to a 2-1 defeat to La Liga side Villarreal in the group stages of the Premier League International Cup.

“Sylvain was exemplary and it was a great experience for Brendan and Jonjoe to play alongside him,

“Sylvain was terrific as I expected him to be, so that was great. It’s just disappointing that we didn’t get that result.” David Unsworth speaking to Everton TV.

For a player who at times is very outspoken, it was refreshing to see him showing his professionalism he a game that is in all fairness beneath him at this stage of his career. Whether we see Sylvain in an Everton shirt again before the end of the season (and in all likelihood the end of his Everton career) remains to be seen, but I hope this gesture enables many Evertonians to remember the positive side of Sylvain Distin, who has been a very good player for Everton in over 200 games since he was signed by David Moyes back in 2009.