I’m not sure who he was, but this was the constant shout from the bloke behind me in the Upper Gwladys virtually all game yesterday. And unfortunately, such was the nature of the game, I heard it rather a lot, with Liverpool definitely the bigger threat going forward than our powder-puff attack. 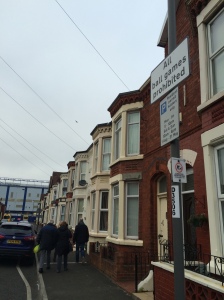 I think Everton players went to Goodison via Diana Street…

Everton were quite clearly set up to frustrate and nullify Liverpool, and I’d imagine an ice bath would not be enough for poor Coutinho (bless him) who was the recipient of a fair few clumps as the game progressed, and nothing better than when Besic absolutely fairly tackled him, rather like the Barton tackle back in December – perfectly timed, in from the side, ball first, and we’ll see what also gets taken out afterwards. He clearly didn’t fancy it after that. Anyway, enough about his bruises, more about us.

It wasn’t pretty, but it was pretty effective. Despite all the possession, despite some alarming gifts from Barry in one 10 minute spell, and despite the impression you’d have got from the ‘highlights’ package from Match of the Day, our once Dodgy Keeper was largely untroubled all game. A couple of saves or blocks, but not much more. SlippyG had an impressive overhead kick nodded over his own bar by Naismith (yes, our forward, summing up how we played), and that moment of destiny, scoring the winner in his last Merseyside Derby, sadly, ahem, slipped from Gerrard’s grasp. The boos that greeted his departure at the end of the game underlined how much Everton will miss him, or rather underline how much hurt he has inflicted over the years – and, of course, how many times he’d scored against us as well!

It was more of a Dogs of War performance of yesteryear, with Martinez not deploying the ‘best of a bad job’ in terms of players that Royle had to muster in the 90s (don’t forget that uninspiring team sheet in ’95 won us our last trophy and finished 6th the following year), but deploying the ‘needs must’ tactical approach for an Everton team that has failed to live up to our own much-hyped expectations this year, and start to get more solid at the back. We’ve kept 3 clean sheets in a row now, we don’t have the worst defensive record in the division any more, but the balance is still to be achieved, with only 1 goal in the last 3 as well, and that a rebound off Rom’s knee. Hardly goal of the season. But in Besic, McCarthy and even Barry, we’ve got a cover for our wobbly defence that is needed right now, and is likely to be deployed again on Wednesday night. Barry showed some signs of his former self, and one or two of his current self, but on an upward trajectory one hopes, and McCarthy and Besic were superb at doing what they had to do. Try something more expansive yesterday and we’d probably have been walloped.

But the goal of this season now (see what I did there, tenuouslinksRus) is sadly safety first, and entertainment will probably take a bit of a back seat. Quite what the Young Boys scout (too many jokes, too little time) thought of yesterday only time will tell, but for certain he won’t have rushed back to Bern with a brimming dossier of Everton’s flowing attacks, at least not from this game. He may well say watch out for Barkley, one minute he lets a ball slip under his foot to release a Liverpool attack, the next he makes a great run and delivers a fantastic ball to Coleman (I wish he’d hit it first time), and then he slips a ball through to Lennon to launch another attack – and he was only on the pitch from the 85th minute. I wonder if he’ll get a go at Stamford Bridge?

If he is to get a game, it may be to replace Naismith. Once again, Nais revealed his true Everton qualities, running all day, in defence as well as attack, some great closing down of the woeful lump Sakho, and of course our favourite moment, unnecessarily getting involved in support of Besic (who frankly looks like he needs no support, and especially as he probably has his terrifying-looking Dad in the stands) and squaring up to Henderson. Lovely to see two scousers having a set-to in a Mersey Derby! But yes, probably to replace him. He looked knackered towards the end of his pitch-time, and the worrying time laid low after his mis-timed header in the first half may mean he needs a spell to come off the bench. We’d miss his closing down of the Chelsea aristocrats, and it would leave Lukaku even more on his own, so if he’s fit he plays. His misplaced passing one can forgive for another game if he helps to secure at least a point at Chelski.

If we’re reviewing only Everton performances, one has to say how superb Jagielka and Stones were again. The curse of being on Football Focus eluded Young John Stones, and he proved once again what an outstanding talent he is, and curiously how he has actually helped improve Jags form at the same time. It can be no coincidence, because whilst the skip is worrying about covering for the leaden-footed Distin these days (sad that his pace has now left him) or another ricks from Alcaraz, he can hardly be concentrating on his own game can he? And in Joel we now appear to be able to trust, which will also help the back four. Oviedo was toasted a bit too often by the excellent Jordon Ibe for my liking, and once again we have to wonder what has happened to Garbutt? Our second best left back is young Luke, and Oviedo provides cover for that position and further forward. Whether Luke or the injured Baines would have handled Ibe any better is open to question, but why he can’t get in the squad let alone on the pitch is a bit mystifying. Has he gone on holiday to the Bermuda Triangle?

Back on the pitch, and Lukaku looked like a man up for the challenge in the first half, and a man who couldn’t be arsed in the second. To be given offside so often is bad enough, but when many of these are when coming back from an offside position, it’s even worse. He wants balls played in to him quickly apparently – well, if that’s so, then he needs to be getting onside quickly after an attack breaks down, and not saunter back as if without a care in the world, to then incur the wrath of the faithful. He’s a top drawer player, who is still a kid remember, but he has to learn, and let’s hope Big Dunc puts his arm around him and nurtures the obvious talent. But I would suggest the RM considers giving him a rest occasionally, and give Kone a go up top, who clearly can hold the ball up better, and hasn’t failed to impress in the cameo moments he’s had since his injury return. Why not swap after an hour if not swap in/out for a few games?

Mirallas, will he stay or won’t he (frankly, if he “wants a new challenge”, he could try challenging a few defenders a bit more often) will be the talk of the summer (apart from “why haven’t we signed anyone, it’s August 31st FFS”). Yesterday was a flitting performance; this is the guy that announced himself to us in an outstanding first half against Liverpool before injury curtailed his afternoon. But if he keeps this level of performance up, and this level of moaning up, then he can go as far as I’m concerned. When he’s good he’s very, very good, but he’s not good often enough for me. If he wants Champion’s League football, and we can’t offer it to him, then I’d suggest he goes to the likes of Gent or FC Midtjylland (yes, I did look that one up) who look like they’ll be in it next season. I can’t see his erratic performances attracting the likes of Atletico Madrid.

So, another derby day passes in to history. Not this time a thrilling 3-3 draw, or a Jags thunderbolt to the top corner to talk about during the hiatus, and this game will not linger long in the memory. But on the road to sanity, if ever such a thing can be achieved whilst supporting Everton, this may be one of those junctions which we look back on and say we turned in the right direction…..not charging up the nearest road with flags and sirens blaring only to find ourselves in Goole (other soul-destroying towns are available), but a more methodical trundle up the right road, map in hand, confident that we’re navigating towards safety and a brighter future. I can’t believe I’m even writing this, but “needs must”.