Curious reaction from Everton supporters both before and after the game. ‘Before’, expectations were not high, and yet ‘After’ there was a lot of mumbling about not taking the game to City, “these are shite” etc, and that we deserved a point. We are an odd lot sometimes. 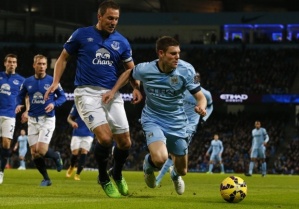 I must admit, it was a surprise that possession was as near as 50:50 as you can get without it being, well, 50:50, and that when you cast your mind back over the game, Howard only had one save to make, and a bloody good one it was too. So for all the dominance of City in the first half, very few openings were carved out, and as we ventured forward more in the second, we weren’t caught on the counter as one might have expected. Oh hang on, Howard did have another save to make, one which was impossible, from a superbly taken penalty by Toure. Mmmm…..the penalty. Let’s not shout ‘dive’ at Milner, who I thought was exemplary both then, during and after the game, especially in reaction to other ‘coming togethers’ he had with his mate Gareth Barry. It was hard for him to stay on his feet, but frankly I was knocked off mine by Marriner’s decision. It was the speed at which he pointed to the spot, it was the fact that he couldn’t have seen it properly, and the fact that he didn’t consult his lino, and nor did he book Jagielka, a seemingly normal part of the process when a pen is given these days. Even the City fan I was sat next to, on a very comfy sofa, with lovely and plentiful beer (about the only thing we nicked off City yesterday), was surprised and embarrassed at the award.

But it’s done now, can’t turn back the clock, blah blah, but good luck at Goodision next time you’re up there Andre.

What of us. A somewhat bemusing selection showed that we had come to sit rather more defensively than of late, but the defence equipped themselves pretty well on the whole, especially Distin who was the main man to profit from Kun Aguero’s early departure (I think that’s how you spell his name….), but who turned in as sound a performance as Wednesday’s was awful. Jags too, but I wonder if it was because we had less opportunity to pass it across the back four than usual, and so less pressing, and so less panic. They just concentrated on doing what they do best – defending. But perhaps it was also that Everton showed that a quick ball in to midfield can be the answer to high press teams. If you’ve got 3 players chasing down our back 4 (or 5 if you include Howard), then a quick ball to bisect those 3 pressers in to midfield, to a player like Besic, Barry or as he showed later Barkley, a player able to receive and turn, it means that 3 of the opposition are behind you, and by definition far fewer in front of you – result: space. That might just be the turning point right there, no pun intended, when we realise that a possession game doesn’t just mean hitting the magical 60% stat but achieved in your own half, or more often own third of the pitch. And yes, lumping it up to the big fella works sometimes too.

Besic is worth a few words. He has settled in really well this season, and with Barry, Gibson and McCarthy’s injury problems, he’s had more opportunities by now than would have been expected. He has a lovely pirouette routine going on, with some Blues around me last Wednesday christening him Zebedee and humming the Magic Roundabout theme tune (younger readers can now google that). He’s worked on eliminating his turning in to trouble, but even when he does, he’s got pretty good feet to get himself out of it; his passing has improved, even to the extent that he was with less blame than most against Hull; we haven’t seen much of his over-ambitious shooting lately either. Or precisely, virtually none. But for a cracking effort against Hull, he hasn’t threatened the health and safety of the fans of Row Z for quite a while now. Not keen on him eliminating shooting completely from his game, and in fact I want to see him getting further forward and driving at the opposition, exchanging 1-2s on the edge of their box, and maybe a shot after that once he’s bearing down on the oppo keeper! There I go, dreaming again, it’s the ‘hope’ you know….And then his tackling. Much to everyone’s surprise, he hasn’t been sent off yet, despite his reputation for what we’ll call ‘robust’ tackles, and getting that right in the Prem so early is a major achievement. I’m looking forward to a ‘coming together’ as we must now call them, between him and Barton. And he’s only had 3 Yellows so far too!

Anyway, good lad Besic, and maybe he’ll play alongside Ledson against Krasnodar – look out for some tasty tackles if that’s the case!

Lukaku looks to be getting back to his best. He didn’t have many opportunities, but the one he had that drew out a world class save from Hart, and indeed his belter against Hull, showed that given the ammunition, he can fire us back up the table damn quickly. His understanding with Mirallas is improving with every game, and both Belgians seem to now understand the offside rule, which is always a bonus in a forward I always think.

A 1-0 defeat then, a narrow defeat on score and possession, but the reality is we carved out precious few chances to make the game even. Not that we couldn’t have nicked it, but it was not to be. I honestly think that the belief will return more from this game than many predict, even though it was a defeat. We showed we can match it with the top two sides in the PL, ok both defeats, but never over-awed, and never out-played, and we played some really good football. It isn’t an inferiority complex to admit that City and Chelsea will be 1st and 2nd one way round or another, and frankly we are not – yet anyway – in their league. But if you look at the dross from 3rd to 20th, it shows a long run of good results from any team can get you up there. Look at Newcastle for God’s sake, relegation material one minute, pressing for top 4 the next; and no-one can look at United and not think their play and players makes them incredibly vulnerable.

Onwards and hopefully upwards then Everton. Let the lids have a run out on Thursday (Krasnodar only have pride to play for, so we hurt no-one by letting a team like this run out to Z Cars – Robles, Browning, Garbutt, Galloway, Alcaraz, Ledson, Besic, Atsu, McAleny, Kone, Grant. And then back to the proper stuff Monday week against QPR, who, if memory serves, haven’t won a single point on their travels so far this season.