Well, that was a strange atmosphere.

Whether it was that 5th place had been secured, that thoughts of European adventures to come were mistily coming in to focus, or whether there was an ambivalence amongst some as to whether we really wanted to win the game, the crowd seemed rather muted at times yesterday. The reaction to the Lukaku header summed it up: cheers yes, but hardly raucous. 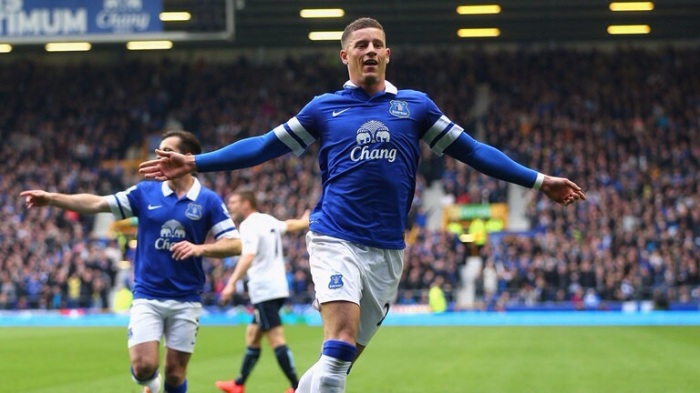 Let’s deal with this ‘did we really want to win’ issue. I can only speak personally, and I want Everton to win every game they play, that’s what I think means being a ‘supporter’ is all about. Why would I not want them to win? Of course, the big reason is that it would mean handing the title to Liverpool, and a year of banter would ensue that would mean living in the company of their supporters would be insufferable. I’m lucky, I live in Nottingham, so the RS are fewer in number, and I only have to put up largely with Forest fans that can remember 1979’s European Cup victory against the mighty, ahem, Malmo, or 1980 when the feat was repeated against the German powerhouse that was SV Hamburg, or the delusion that Shilton was a better keeper than Big Nev (who seems to be getting even bigger by the way). So if that’s the only reason you want to see your team lose, then I’m sorry, I just don’t get it. I’m not sure, but after City’s equaliser, there seemed to be a scuffle in the Lower Gwladys behind the goal, and I can only assume one fan cheered, and others around him “didn’t get it” either.

Back to the game, and the odd atmosphere. It was end of season, and we had nothing to play for. Technically, 4th was still a mathematical possibility, but cock ups against impressive Palace and Southampton sides had blown the real chance we had. No one really seemed to believe that the chance was still alive. I bet Arsenal go and lose their last two games now! But we wanted to impress, and it patches we did, but we were undone by some slick City passing and some woeful defending. And I mean woeful. Alcaraz was really poor and confirmed he is little more than a back up; Jags looked off the pace, befitting a man just back from injury after a lay off since the beginning of March; and Stones showed signs of immaturity in believing too much in his own hype, and misplaced passes didn’t on this occasion counterbalance his tackling ability. The back 3 just didn’t look right. I suspect Jags was rushed back, and I would have preferred a back 4 with people playing systems they play week in, week out, even if that did mean Alaraz and Stones up against Dzeko (how’s his shoulder – didn’t look too bad when he raised his arms to salute the travelling fans at the end) and Aguerro. We just looked like we didn’t know where our defenders needed to be.

On the plus side, Barkley. That’s all I need to say really, but I won’t. He was immense yesterday. Some games this season the lad has drifted in and out, seemed a bit off it, but yesterday was one of the best games I’ve seen him play. Strong, out muscling Mr Muscles himself, Yaya Toure, jinking feet, out jinking Mr Twinkle Toes himself, Samir Nasri, and a goal that Mr Aguerro himself, er, Sergio Aguerro, would have been proud of. I’m not sure if Ross has a passport, he doesn’t look the most well travelled of lads, but I think he’s just booked himself a return trip to Brazil in June. I genuinely think that next season we will see the best of the lad, really learning from what is still, in case we forget, his first full season in the Premiership. He can pick a pass, can clearly shoot (that really was a spectacular goal, played for and brilliantly executed), can dribble, can run at pace with the ball (not easy – try it yourself, out sprinting your mates with the ball at your feet, and nothing at theirs – you won’t be able to do it, I promise, unless your mate is Mr Tortoise himself, Javi Garcia), and can tackle. He is even a header of the ball, and brave in doing that as well. What have I forgotten? Oh yes, yesterday’s goal was a cultured right foot up and over curler, and against Norwich he treated us to a hammer-blow left foot drive, so he’s two-footed as well. Not a bad prospect. Expect the Daily Mirror to be saying he’s on his way to a ‘bigger club’ for 3s and 4d tomorrow (if you’re too young to remember pre decimal pricing, ask your parents or grandparents – in essence, it’s about 17p, in other words, they’ll be saying we should sell him for a fraction of what he’s worth. On your bike boys).

Naismith did another good shift, and only he will know why he didn’t lift the ball over an advancing Hart for what would have been 2-2 after being played through after Barkley’s 80m dash. But he seems to be thriving in the advanced role, playing with a striker alongside him (that’s Lukaku in case you’re not sure we had one yesterday) rather than playing out wide or constantly tracking back. He did do some tough tackling, but his main effort yesterday was the running, the finding of space, the dragging around of defenders, and he’s turning in to quite a different and valuable player to the one that I, and others, slated earlier in the season. He’s gone from Championship standard to proven Prem quality in the course of our season. Well done lad, I think 100% of Blues are delighted that you’ve proven us all wrong.

So that’s it, another home season at the Old Lady has passed, and just one more game before our holidays. I suspect a junior side against Hull, and actually suspect a junior side FOR Hull, plus Jelavic of course. Let our loanees lose, give Ledson a half, maybe even partner Stones with Browning, let Garbutt have a full game and give Baines a day off, but don’t let Mr Selfie himself, Magaye Gueye, or Mr Rekordlig himself, Tolis Vellios, anywhere near the pitch.

And Blues, just dwell on this even before next week – we are 5th, and we will stay 5th. And this was supposed to be a season of transition. Wow. I can’t wait for next season already.