Murphy’s Law – “Anything that can go wrong, will go wrong”. 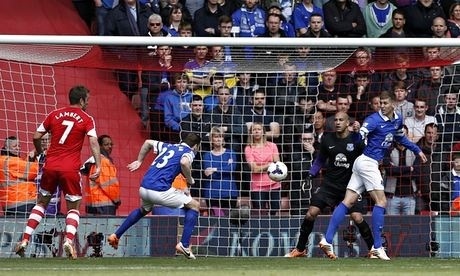 You’d think with the number of Irishmen at the club, we’d be immune from such things, given a kind of free pass. But whether it was the injuries to yet more key players, making our squad look decidedly thin, and only half the bench actually having started shaving, or the 1245 start for bleary-eyed travellers from Merseyside to the sunshine and wind Capitol of the South, or the fact that most of our lads seemed to be playing without a stud on their boots, or the first and the then-I-don’t-believe-it-a-second-own-goal, or the non penalty award, or the complete lacklustre performance of a team that only 6 days before had ripped the reigning PL Champions a new one…..whatever could go wrong, absolutely did. Big time.

I could go on. And on. Let’s face it, there are plenty of negatives to focus on should we choose to do so. I’m struggling to think of one player who stood out, and we even had the sight of the best left back in Europe limping off just before the end, just to cheer us all up, and possibly another key player absent next week.

Let’s try, through all of this gloom, not to feel too sorry for ourselves. Southampton played really well, but never really looked like scoring, and so we did it for them. Twice. So kind and thoughtful. But let’s try to move away from the game, and focus on what we are achieving at the great Club that is Everton. A starting line up with 4 players of 19/20; 2 more in their early 20s; and 3 more kids on the bench, one of whom is an England U17 skipper no less, and two others who’ve represented their country before they’ve turned 21. And add to that a 23 year old keeper.

These strengths are positives to dwell on, but of course they are also part of the problem. It’s not their fault, but we don’t have Gibson, Kone, Oviedo, Pienaar, Jagielka, Distin, Mirallas available at the moment. A squad such as ours is just not going to cope with that kind of injury list, so it’s inevitable the kids step up, and it’s inevitable that they’ll struggle from time to time, just as they did against Palace. But we know that Martinez has his plans, and these boys will be a strength of the future, and there’s a few out on loan to add to that crop, and I for one feel really happy about that. But yes, hacked off that not only the kids, but the grown-ups played poorly against the Saints.

For heaven’s sake now Everton, don’t do this season what you seem to have been doing for far too long – cocking up a promising position. Lose our next two games and we might finish 7th, and miss out on Europe altogether, let alone Champions League.

That would be more than Murphy’s Law. That would be downright cruel, especially if the other lot do what we suspect they will – and win the thing.