In just under 12 months David Moyes has seen his managerial reputation shattered following a disastrous spell as manager of Manchester United. But it was Sunday when his flaws were exposed to the maximum in front of the watching nation as Roberto Martinez highlighted the tactical naivety of his predecessor. 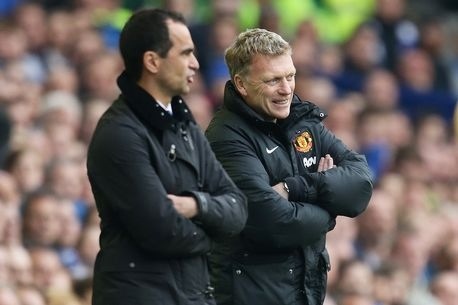 In securing a thoroughly deserved 2-0 victory over United, Everton did far more than secure three precious Premier League points. The ease in which they swatted aside a poor Manchester United side proved to the United hierarchy and to Sir Alex Ferguson that they had made a huge mistake in appointing Moyes as manager.

United thought they were appointing the best of British. The best manager in the Premier League who had fought against debilitating financial constraints to consistently overachieve and secure consistent top 8 finishes for plucky Everton.

Evertonians have known since October, maybe November at the latest that the truth was far different, it has taken the rest of the nation a little longer to realise but Martinez has broken free of those imaginary shackles to install Everton as genuine top four contenders. That in itself would be impressive, however the Blues play with incredible freedom, with flair and with arrogance and now believe anything is possible.

Moyes’ own arrogance has been his downfall. He believed he had done a job at Everton that could not be bettered. He spoke of players needing to move on to fulfil their potential, but in truth Leighton Baines and his Everton teammates will go on to achieve far more at Everton than David Moyes will ever achieve at Manchester United.

Unfortunately despite overseeing a huge improvement in Everton’s fortunes during his 11 year tenure, Moyes’ outspoken comments have sullied his relationship with the loyal Evertonians. Although one or two (and I include myself in this) will feel slightly sorry for Moyes when the inevitable is confirmed, he will not be remembered as a great and has surely blown his one shot at the big time.