Three points. Erm, that’s about it on the ‘positives’ front.

Ok, slightly unfair as individual performances from the likes of Stones and McCarthy couldn’t be faulted, but in terms of quality of football, it was a bit chalk and cheese from last week. 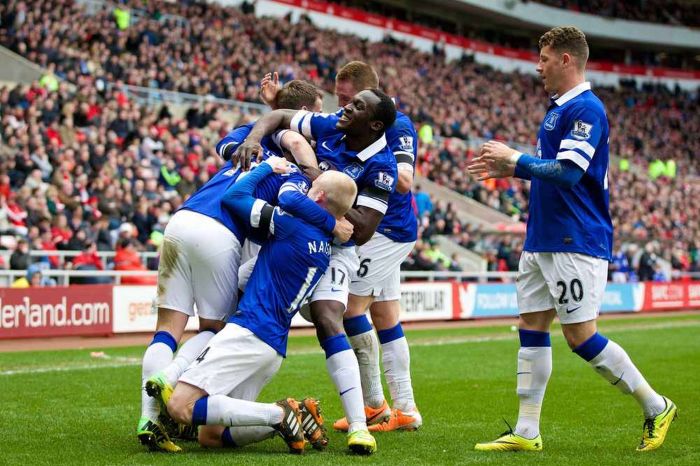 Somehow, the emotional high from last week, combined with a desperate Sunderland team, a cagey Barry trying to avoid a 2 game ban from another booking, and of course the self-imposed (but desired) pressure of knowing that 4th is in our hands, meant we looked strangely tentative. Whether that would have been eased had Naisy complimented his exquisite turn with planting a shot in the top corner rather than Row Z, we’ll never know. A second chance that he could and should have planted also led to nervous exhaustion on the ‘terraces’ of the away fans.

Deulofeu was a source of constant energy and positivity. His stats of 20+ appearances, albeit many as a sub, and only 3 goals and 3 assists tells its own story. I love his driving at defences, and Alonso will be waking up in a cold sweat for many a week – it’s one thing knowing he’s going to go outside you, it’s another thing stopping him. Gerry’s pace is electric, his decision-making needs a battery recharge. He has to pick out players in the box, and quickly, because runners often overrun him once he’s slowed down to showboat it a bit; but I’d also say that it is inevitable that he’s going to fire balls across the 6 yard box, so the forwards need to read that better too. I love having him in the side, he just needs to shoot quicker, pass quicker (pass at all sometimes) and things will fall in to place. The last few games give his obvious talent and confidence a platform to announce himself to the world. And other players will feed off that.

We move on to a tough game against Palace, a side that will be really hard to break down. I’d start with both Deulofeu and Mirallas, plus Barkley, and bring Naisy on if we need to. Pace will be king, going forwards and going back. Bolasie and Puncheon will be quick on the break, but their defence won’t want us running at them. I can’t wait.