Apart from Gerry’s deflected scuff, and Seamus’ piledriver-thunderbolt-worldy at the end, there wasn’t too much to get excited about at the Cardiff game. There was, however, some things to get what might be called ‘excitable’ about. 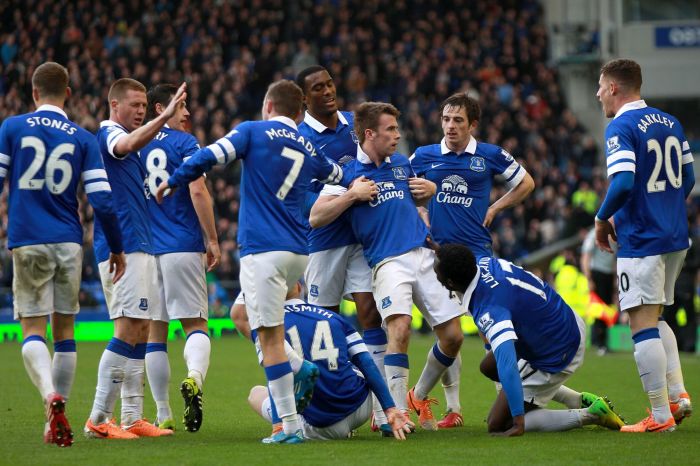 I am fast coming to the conclusion that we’ve lost our way a bit at this stage of the season. Actually, it would probably be more accurate to say that opposition sides have found our way, and we haven’t got an alternative. We desperately looked short of ideas against Cardiff once Plan A was clearly not yielding dividends; we face sides who happily let us build possession from the back, they either close us down up there so we end up having to hoof it or make a mistake, or, like Cardiff yesterday, they have a flat back 3 or 4 with 5 massed ranks in front of them. And we can’t seem to break them down.

We had our jinkiest (no, autocorrect, I didn’t mean kinkiest) players on from the start although they were both removed after an hour of frustration, to be replaced by the somewhat less jinky (and less kinky) Naismith and McGeady. Gerry and Kev were the source of quite a few groans from the sanctity of the Upper Gwladys yesterday, although the biggest source of bile was reserved for an ineffective and lightweight Osman who had one of his worst games in an Everton shirt in my view. More on Leon in a moment.

I like Mirallas, and he has really put a shift in most of the season, and especially since Christmas as he has sought to counterbalance the deficits of our injury list, but yesterday it either seemed he wasn’t prepared to take men on, or if he did, he took on one to many. Cardiff were clever though. They had two right backs playing, one in front of the other, and on both flanks, our threat was nullified by their ganging up on whoever was in possession. When a Deulofeu or a Mirallas is faced with 3 or even 4 defenders to junk through, it is inevitable that they cut inside and play the ball back, and then the attack builds up on the opposite flank, with the same result. Surely it is time to move the ball inside, and drive forwards at the defenders using big Rom as both the shield and the wall to try 1-2s to get through the status but otherwise effective back 9. We didn’t seem to try it, we just tried the usual route, it failed, so we tried the other usual route, and that failed too. We need to find another way. I’d have encouraged Gerry to play more centrally and run at the big central two, rather than the rather fleeter of foot full or wing backs. I love the fact that Gerry has a go at defences, although like Mirallas, he seemed a little less confident in doing so yesterday. “He’s norrasgood as he thinks he is” said Mark Lawrenson from behind me (or more likely it was his Great Aunt). Well, actually Aunty, he is very very good, and is just 20. And like Stones, Barkley and Rom who are the same age, they will make mistakes and they will also play gloriously well in the same breath. It’s called ability. It’s called confidence. It’s called learning.

And all three of these need our support, and not shouting that they’re norrasgood as they think they are. It is about getting behind them, and helpfully suggesting to management how they can be used better tactically. A lot similar could be said to the whole team, which has a great mix of youth and experience, and remember, we’re in a first year of a new manager, who is also ‘young’ in the ‘let’s aim for CL rather than avoid relegation’ agenda.

Where I would be hypocritical for a moment, is reflecting on Leon’s performance yesterday. If he was 18, I’d be making sure his great feet were backed up by a bit of bulking up in the gym. But at the age of nearly 33, he hasn’t bulked up, and he is just as easily brushed off the ball as he was when he went out on loan to the likes of Carlisle and Derby. He has been, and in fact still is, a magnificent example of a loyal one-club player, and I love him for that. But whereas in the past I could forgive his occasional falls in possession, when he did this yesterday either in the crucial centre of the pitch or when he drifted more out wide, he simply exposed us to a counter attack that a top team would have punished more than Cardiff could do. Surely now it is time to use him in the last 20 minutes of games and not start him, and not the Captain’s armband which I would have given to Sylvain yesterday.

I thought McGeady had a good impact on the game yesterday, and that bodes well. Coleman and Baines were up and down like tart’s knickers, but less effective as they were forced in to the corners by the defence, and ended up having to cut back and play inside. Stones and Distin looked solid enough although surely one of them was absent for their goal? McCarthy once more ran his little white legs off, although as a fellow ginger of the pasty skin variety, I must fully endorse his sensible use of playing in the shadows of the Main Stand for large proportions of the first half as he clearly hadn’t applied the sun cream before the game; he obviously applied some Soltan at half time though.

So, 3 points gained, and in the end in the end, that’s what the record books will say. Everton won 2-1 with goals from Deulofeu and Coleman. It won’t say Everton laboured to a 2-1 win with somewhat fluky goals from said players; and it also won’t say that Marshall was almost unbeatable on the day. We played better against Spurs and Chelsea, and got no points at all; we played better against Arsenal and got knocked out of the cup. So let’s take our good fortune and move on to the Swansea game, for which I dearly hope RM has another trick up his sleeve just in case they come to play for the draw. Based on their normal style, we won’t get 68% possession next week, so we must make better use of what we do get. I wonder, just wonder, if he’d be brave enough to play Mirallas, Barkley, Deulofeu and McGeady all from the start? Unlikely of course unless he gives one of Barry or McCarthy a rest…..but that would mean a very different Plan to the one that doesn’t seem to be working. Worth a risk?

2 thoughts on “Obstructed View – Reflections on the Cardiff (H) Game”