If there is anyone ‘up there’ who is monitoring what it is like to be an Everton fan, then ok, you’ve had your fun, now please let an array of good things happen please. 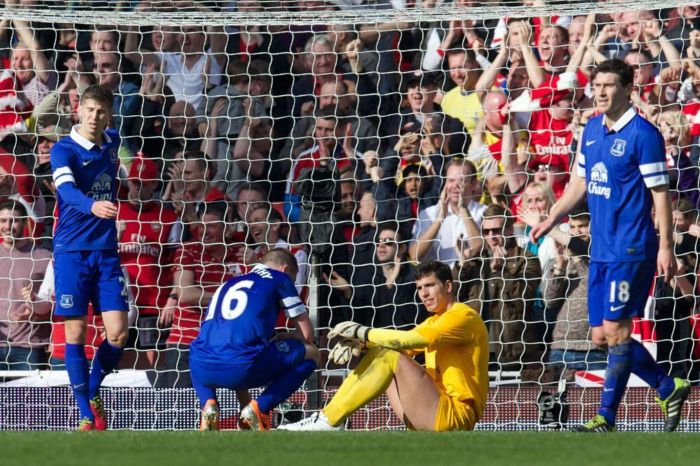 We don’t, of course, have a divine right to win the league or to win a cup competition, but if there is now another team, now that Citeh have won the lottery, that continuously gets close only to have their wave of optimism dashed on the rocks of misfortune, then I’d like to be told who that team is.

The reality is that we were beaten by a better side on the day, but that doesn’t mean we deserve to look at the record books for ever and ever and see we lost 4-1; it also doesn’t mean that if Barkley’s slightly-too-high shot hadn’t been lower by about 6 inches, that the inferior team (albeit slightly) might not have won. It is, as many have said in the past, not so much the losing, but the impact on hope and optimism that really makes me upset. I was genuinely optimistic of a draw, and then a win at Goodison, and that seemed to be the way things were going, at least for half of that equation, but then Barry stuck his leg out and Arteta converted the deserved penalty – not once, but twice, adding another knife to the heart of hope. Perhaps he would miss a re-taken penalty, and the controversy that seems to haunt our chum Mr Clattenburg would continue with Everton the rare beneficiaries. Nope, there goes that hope thing again.

Perhaps the substitutes would make the difference, so often a cause of celebration of managerial guile and intelligence this season. Nope.

When we look back, when we can be brave enough to look back, we will I’m afraid reflect that the season that started so well is now fast running out of steam, as for a third match in a row in the Capital, we look great up to the box, to then, like Stuart Barlow, fall apart. No wonder that man had the nickname Jigsaw. Lots of pretty pictures, then we fall apart in and around the box. We lack the final ball skills just when we need them most; players who have been playing it to a blue shirt when there’s space about, seem incapable of doing so when those same blue shirts have a few opponents in closer company. Not that surprising I guess, but we were getting over that hurdle in the first half of the season, and now we aren’t. And I don’t get it.

A comfort of the match was that Barkley had a much better game, that McCarthy tackled superbly (a sequence of three in quick succession on the edge of our box are ones that stand out), that Stones didn’t disgrace himself, and Lukaku looked interested and bullish up top (although with a Moyes-esque habit of drifting out to the wings).

We must be downheartened, because IT MATTERS, but we mustn’t lose perspective. This was supposed to be a transition season and we’re doing better than many expected, but as ever it is the fact that early season form raised our hopes, only for them to be dashed once again when it really really mattered in the big games. Let’s look forward, let’s win as many games as we can from now, let’s secure at least a Europa League spot, let’s go in to a summer of transfer speculation and activity (oh God, there are those hopes again, will I never learn?) and start 2014/15 with renewed optimism.

And maybe him/her (it’s International Women’s Day as I write, so who knows) up there will smile and say “ok Everton, it’s your turn now”. It may never happen, but it’s that hope that keeps us going as well as the thing that saps our strength and breaks our hearts.