After the disappointment of the midweek Premier League postponement Everton are back in action in the FA Cup. Swansea, one of Roberto Martinez former teams are the opposition for a fifth round tie as the Blues continue in pursuit of their first silverware since 1995.

Success for Martinez would make him the first manager to lift the cup with different clubs in successive years and with Manchester City defeating Chelsea yesterday and Arsenal facing Liverpool at 4pm the cup has a relatively open feel about it this term. 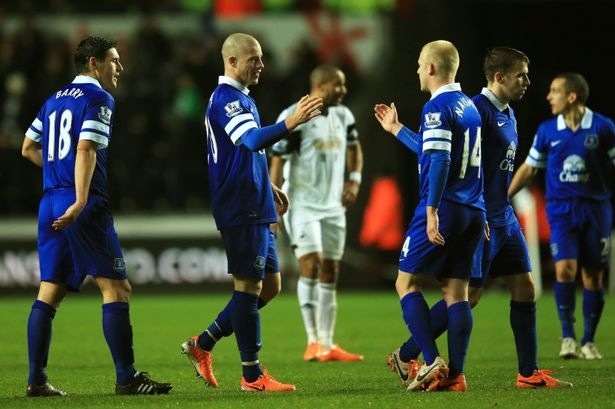 The teams have already met once this season, the Blues winning in dramatic fashion thanks to two brilliant goals from Seamus Coleman and Ross Barkley. In fact the Blues are unbeaten against the Swans since the welsh side returned to the Premier League three years ago.

Swansea are another side who have disposed of a manager this season. Michael Laudrup, who was successful in his first season in charge found things much more difficult in his second year at the helm and was dismissed with the whites in the midst of a relegation battle.

Garry Monk the new man in charge is well known to Martinez. The veteran player was Martinez’ captain during his time at the club and Roberto feels he has all the attributes to be a success.

Everton remain short of a fully fit striker, with Lukaku still a couple of weeks away from returning and Lacina Traore is likely to start from the bench, although he has benefited from the extra days afforded by the midweek postponement.

Despite naming a team for the Palace match, it is unlikely the team will bare much resemblance. Joel will compete with Tim Howard for a starting spot in goal and Gerard Deulofeu will in all likelihood continue his return from injury with an hour of action.