Everton have today been linked with a sensational move for highly rated Spanish youngster, Sergio Canales. The Valencia midfield man has found himself out of favour at the Mestella and a number of clubs in Spain are reportedly chasing the signature of the former Racing Santander and Real Madrid player,but it is the apparent interest of Everton and Roberto Martinez that is attracting the Spanish u21 international. 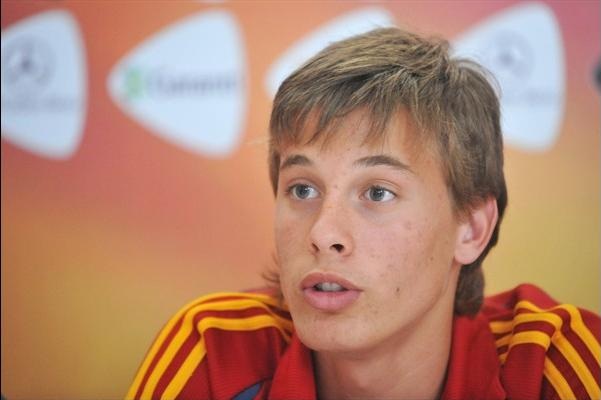 The stories are linking the Blues with a season long loan deal with a view to a permanent transfer in the summer, for a fee in the region of £4 million. Contrary to reports, Everton are allowed to sign further players on a temporary agreement. A quick look at the Premier League rule book clearly indicates that only domestic loans are limited, with no more than two at one time and no more than four over the course of a season.

Canales’ links to Everton go much further than the last few days. Back in January 2010, the teenage Canales was playing for Racing Santander when he scoring a goal against Sevilla that had the pundits purring. Speaking after the match, Canales spoke to the media to reveal that his inspiration for the goal was non other than Everton midfield man, Steven Pienaar.

Earlier in the day, at a snow-covered Emirates, Steven Pienaar had scored a sublime goal, cleverly lifting the ball over Manuel Almunia and into the empty net. The goal was outstanding, so good in fact that it attracted interest all round the world. Sergio Canales had been sat watching the game in his hotel room and instantly set about mimicking the South African. That evening as he jinked through the Sevilla defence, Canales recalled Pienaar’s exquisite finish and decided to go one better. Andres Palop was in the Sevilla goal, but he was no match for Canales, who ‘dinked’ the ball out of the reach of the goalkeeper and to the delight of the Racing support, into the goal to put his side on their way to a 2-1 win.

Canales was quoted in the Guardian, “I thought of Pienaar’s goal”.

Watch the two goals below, which is the better finish? Would you be happy with Everton bringing in another player on loan?

One thought on “Is Canales already an Evertonian?”