Our columnist Tom Hennessy is back with his views on the latest youngster to break into the Everton side. John Stones was David Moyes’ final signing for Everton, ironically beating Roberto Martinez and Wigan to his signature. Stones burst onto the scene at Barnsley last year and built a reputation as the best up and coming right back in the country. Martinez had other ideas and has slowly nurtured Stones, who is performing with a confidence that defies his tender years. 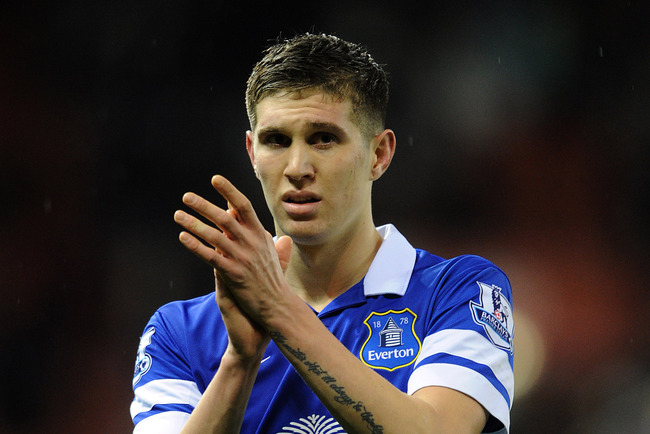 At the half way point in the current season, Everton fans can look forward to the remainder of the year and further into the future with a renewed sense of optimism. The man in brown shoes, has encouraged positive thinking both on and off the pitch and it has worked wonders for the players and fans alike.

After the dominant FA Cup showing in the third round, there is serious belief that Everton can go on to claim the famous old trophy for the first time since 1995, yet another cause for excitement was the performance of the young defender John Stones. ‘Stonesy’ continued to build on his growing reputation at Everton with a display beyond his years at the heart of the Blues’ defence against a respectable QPR side.

St Domingo’s has followed the progress of John Stones closely, and with some glowing reports of his pre-season exertions and his League Cup outings, it is now time to wax lyrical again. As mentioned previously on this site, Stones has shown that he could slot into the first team comfortably, and when the opportunity arose to replace the injured Sylvain Distin last week, he did not disappoint.

After coming through one of the tougher tests in English football (Stoke away in treacherous conditions), the Yorkshire man went on to produce an incredibly composed display against Harry Redknapp’s well drilled unit. Despite a team containing some experienced Premier League names and some who have graced the European stage, the QPR players, such as Armand Traore and Niko Kranjcar were no match for the cool-headed centre back. One tackle in particular on Traore brought a resounding applause from the Goodison faithful, as Stones then went onto carry the ball into midfield and start an attack.

On the back of his recent displays against Stoke and QPR, some bookmakers are already offering 66-1 for John Stones to sneak into the World Cup squad and although this talk is premature, should Stones stay in the team until the end of the season, it wouldn’t be beyond the ridiculous to see it actually happen if he maintains the high standards he is setting for himself.

What will also excite Everton fans is that Stones is emerging as part of a strong young central core in the side and fans can look forward to the likes of Stones, James McCarthy and Ross Barkley providing a youthful spine to the team in years to come. Stones himself hopes to endear himself to the fans, saying to EvertonTV;

“Hopefully I can become a big fans’ favourite here. I love the club to bits,”

“Defensively he has got everything. He is a confident boy and always has two or three options and leaves it until the end to make the right choice,”

“He knows he is stronger, quicker and more athletic than the striker he is marking and that gives real confidence. I think he will develop and become a special centre-half for England.

“I thought I had got John at Wigan. I would have bought him again here. I was really disappointed then because I knew what a player he was.”

With strong showings from the young man so far and the trust that Martinez places in him evident,  fans can dream that Stones could go to on to be one of the clubs’ great centre backs, adding himself to the list of names such as T.G. Jones, Brian Labone, Kevin Ratcliffe and Dave Watson.

The question that now remains is similar to the situation of Leighton Baines and Bryan Oviedo, if John Stones continues to do well, should he stay in the team over Phil Jagielka or Sylvain Distin?

What do you think? And what can John Stones achieve with Everton in the long-term?

View all posts by Tom

2 thoughts on “How far can John Stones go with Everton?”