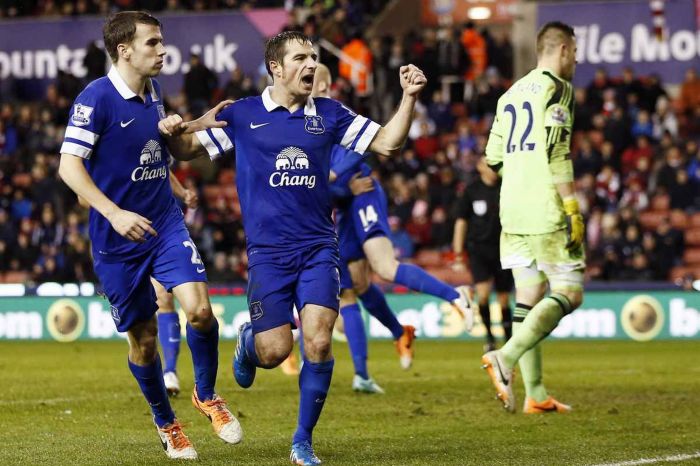 Back in the team after a one match absence due to suspension, Tim Howard added a sense of stability to the Everton rearguard. Due to Everton’s superiority he had little to do and was certainly not at fault for the Stoke goal.

Not at his very best but assured all the same. Created a good opportunity for Lukaku just before half time but Everton weren’t able to get him as heavily involved as they would have desired. Defensively sound and unfortunate not to get a block on Assaidi’s shot from the edge of the box.

For a nineteen year old defender making his full Premier League debut, John Stones was excellent. The former Barnsley man is comfortable in possession and quickly formed a strong partnership with Antolin Alcaraz at the heart of the Blues defence. Was unfortunate that his strong header clearance fell to Assaidi but defied his lack of experience to win a crucial header to clear a last-minute corner.

Another good solid performance from the Paraguayan defender who has slotted into the Everton defence with ease. Martinez has been delighted with his impact and if he continues to play at this level will put pressure on Sylvain Distin for his central defensive berth.

Solid in defence but struggled to link up effectively with Steven Pienaar. The arrival of Leon Osman late in the second half brought him more into the game and he showed great composure deep into injury time to equalise from the penalty spot.

Not at his best but Everton look a better team with him in the side. Barry was not alone but struggled to move the ball quickly enough which slowed Everton down and allowed Stoke to get numbers behind the ball.

Like Gareth Barry he too hung onto the ball too long and at times was sloppy in possession. Certainly not his best game in an Everton shirt and it wasn’t that much of a surprise when he was substituted in the second half.

It is hard to summarise Barkley’s performance. He showed some sublime touches and regularly beat his man, but at times went past one player too many when other players in Blue were better placed.

Much improved from Mirallas and he was incredibly unfortunate not to score at least once. He skipped past his man just past the half hour mark before he fired a terrific shot which beat Sorensen and rocketed back of the crossbar. His free kick just before the break was equally as good but with Sorensen statuesque it hit the post and rebounded to safety,

Not at his best and struggled to impose his game in the difficult conditions and against the over physical Stoke defence.

Only had one real chance and missed the goal with a header when he should have at the very least hit the target.

A twenty-minute cameo which made all the difference. The Stoke defence struggled to control him and it was no surprise he was at the centre of the Everton goal when it eventually arrived. It is possible to earn Man of the Match if you only play twenty minutes?

Unlikely to have many more appearances in an Everton shirt but continues to give 100% every time he steps onto the pitch. Unlucky not to score and looked lively throughout.

Only played the final 10 minutes but was unlucky not to score with a header that was well blocked by the Stoke defence.