Everton will get their FA Cup campaign underway on Saturday with a home third round tie against Harry Redknapp’s Queens Park Rangers. It will be the first FA Cup tie in charge of Everton for Roberto Martinez who will be looking to become the first manager to win the cup in consecutive years with different clubs. 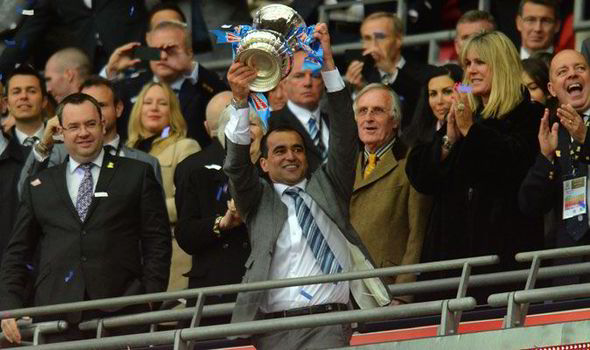 With the Blues riding high in the top five of the Premier League many have chosen to question which competition the Toffees will prioritise. Roberto Martinez was quick to dismiss suggestions that Everton will not be taking the competition seriously by eloquently confirming that Everton will be pushing for glory on two fronts for as long as possible.

“I don’t think you can choose,

“It’s like asking if you prefer your mum or dad. It’s such a difficult question because you want both.

“Whilst we are in the FA Cup we are going to give everything we have got. We are going to be ourselves and cope with any sort of challenge that comes our way.

“In the league so far we have been very good and we want to be even better in the second half of the season. We have a focus to finish the season as strong as we can.” Roberto Martinez speaking to evertonTV

Everton will be hoping that their recent record against QPR will have little bearing on this fixture. The Blues have won just three of the last fifteen meetings between the two sides, a run lasting 14 years due to the Londoners spending a considerable period outside of the top flight. Everton did get the better of their opponents in the latter part of last season, with Victor Anichebe and Darron Gibson scoring to secure a 2-0 win for Everton as QPR were relegated back into the Championship after just two seasons in the top flight.

Harry Redknapp has almost completely rebuilt the QPR team after last seasons relegation. Out have gone the number of high-profile and over paid players that failed to bond as the Londoners finished rock bottom of the Premier League. Redknapp has used his skills in the transfer market, backed by the multi millions of Tony Fernandez to build a team that is currently challenging at the top end of the Championship table. Recent results have not been great, but Rangers did win 2-1 on New Years Day to lift the team back up to third in the league.

In contrast to Martinez, Harry Redknapp has confirmed that QPR’s priority is promotion back to the Premier League and will therefore rest a number of his regular players. One player who will be rested is former Toffee, Richard Dunne.The Irish international has played all the games over the festive period and Redknapp is keen to rest the ex Aston Villa centre back to ensure he doesn’t suffer a recurrence of last season’s injury nightmare. One former Blue who is likely to play is Andy Johnson, who is sure to receive a good reception from the Goodison faithful who still remember the two goals he scored to beat Liverpool in 2006.

Despite confirming his intention to take the competition seriously Martinez is still expected to make several changes to his starting team. Joel is likely to reclaim the goalkeeping jersey from Tim Howard, with Martinez eager to give the young Spanish keeper opportunity to play in the cup competitions.

Two players likely to continue are Antolin Alcaraz and John Stones, who both produced solid performances at Stoke in the absence of regular centre back pairing, Phil Jagielka and Sylvain Distin. Tony Hibbert may be recalled at right back for only his second appearance of the season, but the longest-serving member of the Everton squad has been struggling with injuries this year and may not be risked.

Upfront, Nikica Jelavic may make his final Everton appearance in place of Romelu Lukaku. Jelavic is almost certain to depart Goodison in the January transfer window, but with no deal imminent he will be given opportunity to finish his Everton career with a goal.

Our archive footage comes from April 1989 and a Division One meeting between Everton and QPR at Goodison Park. The Blues recorded a resounding victory with goals from Wayne Clarke, Kevin Sheedy, Tony Cottee and Trevor Steven as Everton ran out 4-1 winners.