There is a temptation, after losing at home to the bottom club, after losing at home for the first time in the PL for 360 days, after only losing once to date all season, to throw your toys out and start demanding this that and the other. But whilst feeling that way for 5 minutes, a moment of reflection brings a very quick reality check. 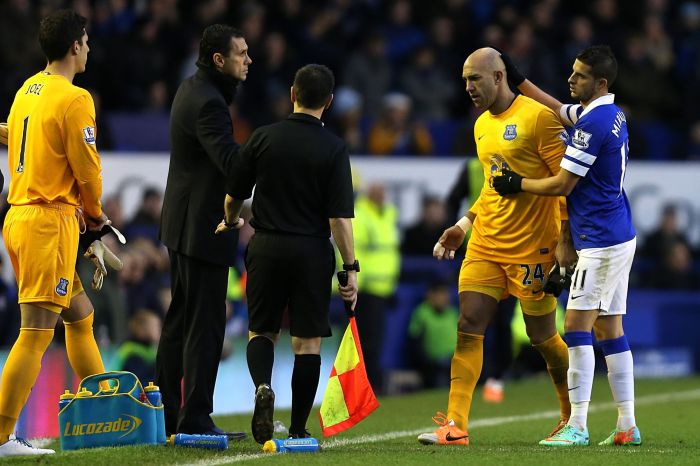 I have to say I have a real mix of emotions. Judging by the standing ovation and the singing long after the final whistle, I don’t think I’m the only one.

To start with, you have to give Sunderland some credit, especially as trips to Goodison have been not only fruitless in recent years, they’ve gone home without the meat and veg as well (see what I did there? No? Please yourself….). They came with a plan, they denied us space, and they pressed in a way that hasn’t really happened since Hull were the visitors. But for Osman’s cock-up – and yes I can say cock, it’s Christmas, when all fowl look nervously over their shoulder, not just Turkeys – who knows if we would have found a way around them.

Given that for 65 minutes after the sending off (correct) and Osman’s tactical withdrawal (insert your own joke here) Everton battered the Sunderland goal, with over 20 shots, 12 of which were on target, you have to think we would have. But we found Mannone in inspired form and our shots were just an inch or two too close to him.

Much of the post match dissection has been around Lukaku’s form. Personally, I thought he looked knackered, so rest him to the bench, stick Jelavic in, a guy who looked keen and hungry after he came on today. Lukaku is fine, he needs a rest that’s all.

If Oviedo just played his last game at LB for a while then he can be proud of his play today and ever since we lost Baines. Left footed right foot shooting from a defender doesn’t get much better than his, he’s scored goals, defended pretty well, and has shown immense energy. Personally, might even give him a chance at left mid if Kevin hasn’t recovered from eating a dodgy sprout, and shift Pienaar across to the right.

Onwards everyone, we lost, and yet whilst I’m hacked off I’m also so proud to see such a performance, so let’s keep positive. Southampton will be a stern test, and so will many more games as our reputation for playing great passing attacking football means many teams have to think about a plan to stop us, before they think about a plan to win. Sunderland did that after a fashion today and good luck to them. They’ll do it again to other top teams. But that’s gone for us, and the only thing that matters is the game coming up on Sunday.

2 thoughts on “Obstructed View – Reflections on the Sunderland Game”