For the second game in succession the Blues travel away from home in search of victory at one of English football’s premier teams. Everton, under Roberto Martinez made a giant leap in correcting years of under achievement on Wednesday night, with a crucial three points at Old Trafford and he has again promised to send his Blues out to attack the Gunners on Sunday afternoon. 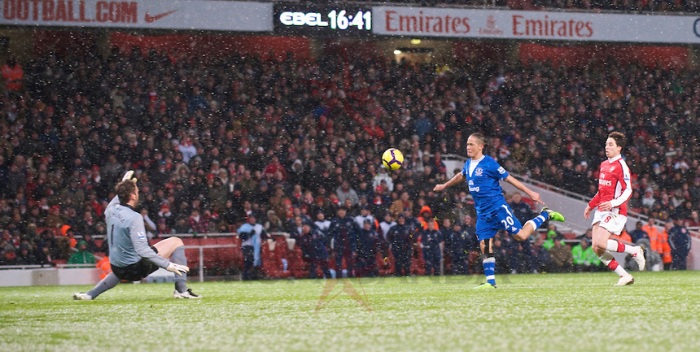 Sunday’s game with Arsenal promises to be the biggest test yet of the new Roberto Martinez era. The Gunners sit comfortably on top of the Premier League table, with just two defeats to their name all season. Arsenal have been clinical all season and have won eleven of their opening fourteen fixtures. However Arsene Wenger’s team have lost once at home already this campaign, with Paul Lambert’s Aston Villa recording a surprise 3-1 victory on the opening day of the season.

If you thought Everton’s record was bad at Manchester United, it is even worse at Arsenal, with the Blues only recording 1 win in their last 28 visits. That solitary victory arrived in 1996, when the Blues, managed by Joe Royle were 2-1 victors thanks to goals from Graham Stuart and Andrei Kanchelskis.

Everton will come up against an old friend at the Emirates, with Mikel Arteta, the best little Spaniard we know, lining up in the Arsenal midfield. Arteta has become an integral member of the Gunners midfield and it still remains a mystery as to how he has failed to represent the Spanish national team. Arteta is fondly remembered by all at Everton and he has spoken glowingly about the positive impact his fellow countryman, Martinez has had on the Blues this season.

“Everton are having a great season and they have got great results against top teams, which is not easy.

“It was a big result (at Manchester United), it was massively important for them and will boost their confidence, so we are going to face a really difficult team for sure.

“I know the fundamentals of the Club and I was happy with the way they dealt with the transfer window.

“I think they did really well and improved the team compared to where they were before. They deserve to be (up) there.” Mikel Arteta on evertonfc.com

Arsenal are likely to recall a number of player who were rested on Wednesday night for the visit of the Blues, with Wenger hoping to put out a full strength line up. Theo Walcott is on his way back from injury, but is more likely to start from the bench, especially with the rest of the team in such fine form. Olivier Giroud will operate as a loan front man with Ramsey, Ozil, Cazorla and Wilshire all offering fantastic support from midfield.

Roberto Martinez is hoping one or two players will shake off slight knocks to ensure he has the same squad of players who featured against Manchester United. Leon Osman and Gerard Deulofeu continue to put pressure on a number of the attacking midfield players, with Martinez facing a difficult team selection. Match winner, Bryan Oviedo will continue at left back with Leighton Baines still absent through injury, the back four will remain unchanged from Wednesday night.