With the MLS season in America approaching the winter shut down period a number of the league’s high profile players are looking for a temporary transfer to some of Europe’s biggest leagues. One player who is desperate to maintain his fitness and form ahead of the summer’s World Cup in Brazil is Everton hero Tim Cahill. 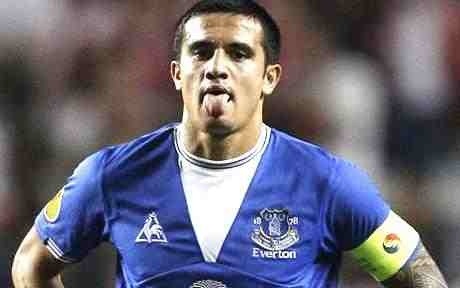 Speaking to the press during the latest international window, Cahill was keen to put his name forward for a return to the Premier League in January.

“The move depends on getting my body right. But the plan is for the World Cup.”

This morning’s newspapers have inevitably put two and two together and linked Cahill with a possible return to his beloved Everton. The Australian midfielder has been in fantastic form, bagging 11 goals as the New York Red Bulls secured the supporters shield for topping the league standings in the first stage of the MLS competition. Unfortunately the Red Bulls failed to maintain that form in the play-offs and despite Cahill bagging another goal, they slipped out on aggregate to Houston Dynamo.

Despite his renaissance is America, should Everton be looking to recruit a former player who was deemed past his best when David Moyes informed the battling Aussie that he was no longer required at Goodison Park. We have seen former players return for a second spell previously and very rarely does it have a positive outcome. Tim Cahill will probably score goals wherever he ends up, but it shouldn’t be Everton. The clubs style of play has changed significantly in the opening months of the season and it is difficult to see where Tim Cahill would fit in the current set up. He certainly wouldn’t be anything more than an impact substitute and that would fail to offer Tim Cahill the regular playing time he desires.

Tim Cahill will always be welcome at Goodison Park, but that should be as a spectator and ambassador, his days as an Everton player have past and that is how it should remain.