The mere mention of the name Brett Angell is enough to send Evertonians hiding for cover, especially those who sat in the Gwladys Street in the mid-90s and spent much of their time ducking his wayward shots on goal. Signed for £500,000 from Southend United, Angell arrived at the club with a reputation as a prolific lower league goalscorer, but left having scored just a solitary goal in a 20 match Everton career. 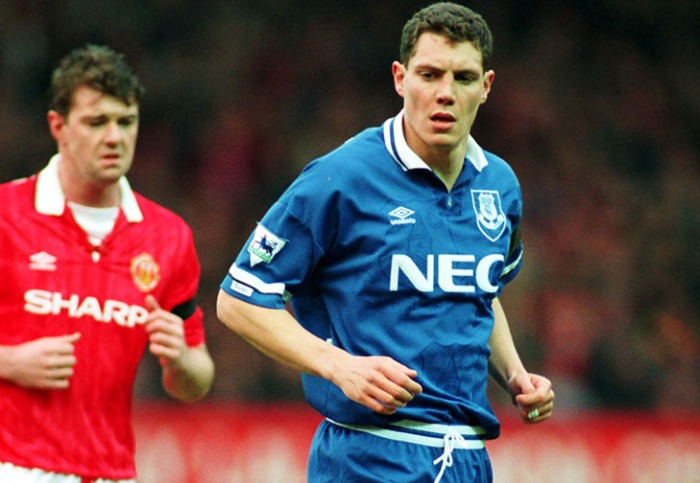 Not many supporters remember but it was actually Howard Kendall who first signed the hapless Angell to play for Everton. As Kendall’s second spell in charge was spiralling towards an inevitable and disappointing conclusion, he gambled on the loan signing of Brett Angell from Division One side Southend. Angell made his debut in September 1993, appearing as a second substitute to lead the Everton attack, as the Toffee’s suffered a 5-1 home humiliation at the hands of Norwich City. Kendall had seen enough and Angell was unceremoniously dumped and he returned to Southend with his chance at the big time over before it had begun.

Now that should have been the end of the Angell and Everton story, but unfortunately, the man sat in the opposition dug-out that fateful September afternoon was impressed by the battling Angell and when Mike Walker left Norwich to take over the managerial reins at Goodison, he made the striker his first signing for the Toffees in a £500,000 permanent transfer.

The Liverpool Echo hailed the arrival of Angell at Goodison, with the headline “Angell of the Mersey” splashed across the back page. To be fair to Angell, his second coming started in spectacular style, as he played a leading role as Everton thrashed Swindon Town 6-2 on his debut. Things got better for the 6ft 4in striker when he scrambled home his first and only goal for the club as the Toffees defeated Chelsea 4-2 in his next match. However, from there on, Angell looked anything but a Premier League centre forward and few could believe it when Joe Royle convinced Sunderland to pay £600,000 (a £100,000 profit) for his services in March 1995.

Legendary goalkeeper and former teammate Neville Southall described Angell in disparaging terms, claiming that his touch was so bad, that his second touch was often a tackle. The Observer Newspaper went one step further, describing Angell as “the donkey’s donkey”

After leaving Everton, Angell went on to enjoy a strong career in the lower leagues of English football and when he retired from the game in 2003, he had scored an impressive 187 goals in 502 games. But where is Angell now, what happened to the man who can claim to have worn the famous Everton number nine?

In 2004, not long after retiring from the game, it appeared that Angell had fallen on difficult times. Having once earned £5,000 a week at Everton, Angell was working at Tesco in Southport in a night-time stock replenishing role, earning just £6.30 an hour. But those stories, which appeared in the Liverpool Echo and several national tabloids, told just half the story, because Brett Angell was still focused on making a career out of the game.

Those night-time shifts were a necessary evil as Angell began the long road to become a football coach. With a young family Angell need to support, the work at Tesco enabled him to take his coaching badges. After securing his UEFA A licence, Angell worked with Portsmouth and Bolton before deciding to move to the other side of the world to continue his coaching career.

Now a resident of New Zealand, Angell is responsible for setting up player and coach development programmes for all regions across the Central Football Federation of New Zealand and helping to introduce proper coaching structures. While he will help individual clubs with coaching, his main goal is to educate coaches so that they can develop players and keep them interested at a grass-roots level. He is a keen advocate of futsal, a football variant played with a smaller ball with modified rules to develop technique and aimed particularly at children.

Happy and content, Angell is able to look back on his time at Everton with fondness and still keeps an eye out for the clubs fortunes. During David Moyes’ time in charge, Angell paid a visit to Finch Farm to learn from the now Manchester United coach and was full of praise for the club.

“I thoroughly enjoyed every minute I spent here. Playing-wise, it didn’t quite happen for me, but I knew I was at a great club and I appreciated every minute of being here. I was lucky to join a club like Everton.”

“People are talking about winning silverware at Everton again – and that’s the way the club should be thinking.”