There are many reasons the international window is despised by managers and supporters of Premier League clubs. Not only does it break up the momentum of the season, it also brings added opportunity for players to suffer injury. Unfortunately for Everton and Roberto Martinez, Darron Gibson suffered a horrific knee injury in last nights match between the Republic of Ireland and Kazakhstan. 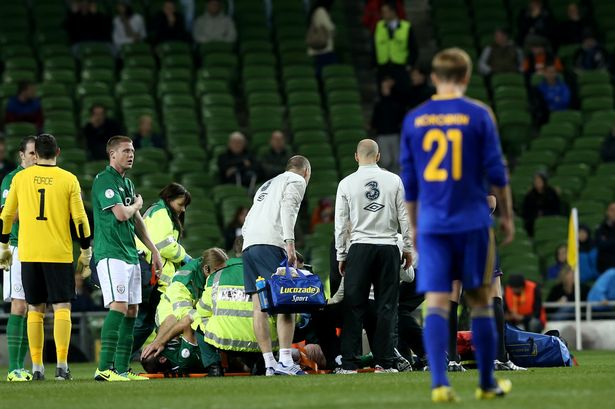 Gibson will go under the surgeon’s knife in the next couple of days, with fears that he had suffered ligament damage confirmed by the club this afternoon. The injury is to Gibson’s anterior cruciate ligament  and will result in a prolonged period out from the first team and it is highly unlikely that the midfielder will play again this season.

Everton released a statement this afternoon stressing that the damage could have been significantly worse and the long-term prognosis for Gibson is positive.

“The length of time the 25-year-old will be best determined once the surgery is completed.

“However, the scans did confirm to Everton’s medical team that no additional damage was sustained to the structure of the right knee, ensuring all treatment and rehabilitation will be focused on repairing the damaged ACL.”

The loss of Gibson will be a huge blow to Martinez, with the former Manchester United player only recently returning to fitness from an injury sustained in pre-season. Fortunately for Everton, changes to FIFA regulations mean that Everton will receive significant compensation for Gibson through the Club Protection Programme, which will cover the salary of an injured player upto a maximum of £17,000 a day.

FIFA have launched a £47 million initiative called the Club Protection Programme (CPP) which means that Europe’s top teams will be compensated if players are severely injured during World Cup qualifiers.

This means that if  a player is injured due to an accident while on duty with his representative team, the player’s club will be compensated for having to continue to pay the player’s fixed salary although the player was not injured playing for their club.

One thought on “Everton to receive significant compensation after Gibson injury”