With the poorly timed international break upon us, there is literally nothing better to do this week other than crack open the old chestnut about the pairing of Leighton Baines and Steven Pienaar. It is probably far too early in the season to be making any real reflections about anything, but when there is no Everton action to enjoy, what you can do?!

For some fans, the question of whether Leighton Baines is as effective for Everton without Steven Pienaar in the side is one that won’t go away. I feel I’ve seen enough over the years to decide that Baines is a phenomenal player in his own right, regardless of who plays around him, but my view is inconsequential and the whole point of this piece is to open up the debate to the wider fan base. I’m sure there may be blues fans who agree with my view-point, yet there will also those who don’t, which is the beauty of football.

It is over the last few seasons that both Baines and Pienaar have made the positions on the left their own and to look at just how effective they are together, let us go no further than last season. Baines was ever-present in the League and Pienaar also started 35 of the 38 games, so there were not many instances where it is possible to really scrutinize whether Baines is as effective without Pienaar. What can be assessed though is the fact that between them they contributed 5 goals/5 assists and 6 goals/6 assists respectively.

With continuing regards to their attacking prowess, Baines was recorded to have created 116 goal scoring chances (highest in the Premier League and Europe) and Pienaar also finished seventh highest in the League charts with 82 chances created. The stats suggest a particularly effective partnership existed between them last season, and this is something that has developed over a number of years.

A more detailed statistical analysis of their relationship from past seasons can be found on the EPL Index site (http://eplindex.com/34237/importance-baines-pienaar-stats-analysis.html) and to borrow some data from that article to quickly summarise, this graphic shows the progression of that connection over the years:

So taking the above into consideration and to fast forward back to this season, you can now prepare yourself for a stat attack of my own. After scouring the Four Four Two Stat Zone for any inklings of information about the pairing of Baines and Pienaar from this season, the following table below has been devised to try to summarise the findings.  With regards to the current campaign, roughly half of Everton’s games have featured Pienaar and the other half have not. With Leighton Baines being ever-present so far, this table intends to show certain aspects of his involvement in the games so far. 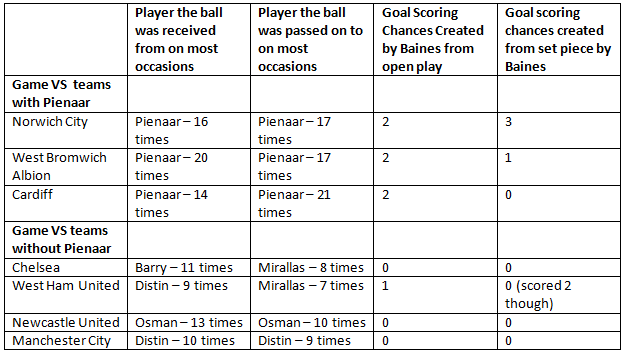 What is interesting about these stats is that they show that Baines certainly links up with Pienaar more than any other player. In the games without Pienaar in front of him, the amount Baines passes it onto attacking players is almost halved in some cases. The stats can suggest that Baines looks to pick out Pienaar more often than not and maybe this is because he knows they have developed a good understanding together over a few seasons.

Others may argue that it is no coincidence that Baines creates less without Pienaar in the side, so it could be fair to suggest that the stats show Baines is more effective with Pienaar in front of him. Although, the other thing that needs to be taken into account when considering Baines’ effectiveness is his set piece ability. Through his free kicks, Baines offers a whole new dimension to the Everton attack and this is pure individual talent. These stats also highlight his effectiveness from set pieces and obviously this has no bearing from Steven Pienaar.

On the other hand, statistics are open to interpretation and they can always be manipulated to suit an agenda. It is worth pointing out that the in the games against Chelsea and Manchester City, Everton enjoyed significantly less possession than both teams, meaning Baines was always going to struggle to be proactive. Against City particularly, Baines’ threat was successfully nullified by their high pressing game plan, and his link up with the likes of Steven Naismith and Kevin Mirallas was limited.

It may well be reasoned that had Pienaar been in the side, Baines may have been more fruitful. Having said that, an argument against this can be found by casting our memories back to a game at Goodison Park last season, where in a frustrating 0-0 draw with Swansea, Baines and Pienaar were both successfully doubled up on and silenced throughout the game by the Swans’ tactics.

To continue, growing media attention has developed with regards to Everton’s left had side attack and obviously with more awareness, comes greater preparation by opposition teams.  There are signs that teams are increasingly looking to tactically quash the threat posed by Leighton Baines, but former Blue Pat Nevin offering an interesting analysis of Baines ability here: http://www.bbc.co.uk/sport/0/football/21838331

Arguably this analysis serves to show just how excellent Baines is in his attacking play and how hard it is to defend against. More importantly, emphasis needs to be placed on Baines’ ability as a defender. At the end of the day, he is primarily a defender and at times this seems to be something that is forgotten when considering his effectiveness.  It just so happens to be an added bonus that he is such an attacking menace to opposition teams.

As a final thought, perhaps it is worth considering the left hand partnership in a different manner, in light of the new style of play. In past years Everton have been incredibly reliant on Baines for creativity; however it has shone through in recent games that less dependency is being placed on Baines to deliver and the team as a whole are being encouraged to create more. For example, the pairing of Ross Barkley and Romelu Lukaku has recently been identified as being very effective thought the middle of the park. Baines still gets forward regularly as part of Martinez’s attacking wing play, but evidently he is now more involved in building from the back.

To conclude it would be interesting to hear your thoughts on this matter, so please feel free to comment below and continue the debate.

View all posts by Tom

11 thoughts on “Is Leighton Baines less effective without Steven Pienaar?”