Like many Evertonians, I will always remember Tim Cahill with great fondness. A true Evertonian who embraced everything about the football club the moment he signed from Millwall. A true competitor, Cahill relished Everton’s status as the underdog, fighting against Sky’s established order to re-ignite a proud historic football team and regain their place amongst English football finest. 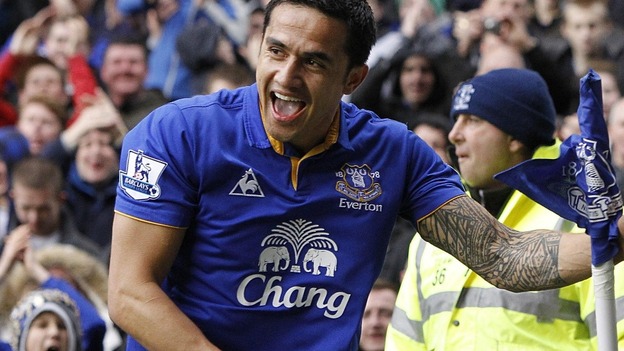 Unfortunately for Tim Cahill, he failed to secure any honours while at Everton, despite coming close on a number of occasions. He was an integral part of the team that re-established itself in the upper echelons of the Premier League and he enjoyed many memorable nights in Europe. He played in a way that endeared him to all and his habit for scoring important goals, particularly against Liverpool, mean he will always be held in the highest of regard by Evertonians the world over.

It was no surprise that Cahill received a rousing reception when he returned to Goodison Park to watch Everton take on West Ham in the final home match of the David Moyes era and it was fitting that he should take to the Goodison pitch after the final whistle to receive the acclaim of the Blues. Tim Cahill and Mikel Arteta probably optimised David Moyes’ tenure at Everton more than any others, with their hard work, steely determination, camaraderie and considerable ability.

A proud Australian and a Blue, Tim Cahill retains a fondness for the Toffees and often refers to Everton as his club. He continues to engage with Evertonians across Twitter and remains close friends with a number of the current first team squad. He has a genuine affection for Ross Barkley and he has been delighted to follow his emergence into the first team picture during the early part of this season. It is therefore, with great delight that a number of Blues have enjoyed Tim Cahill’s re-emergence as a goal scorer in this seasons MLS. A late headed equaliser on Saturday was Cahill’s 10th strike of the season, making him top scorer ahead of the great Thierry Henry, for his current club, New York Red Bulls.

This weekend’s goal was particularly important for Cahill as it secured the Red Bulls place in the end of season play-offs which ultimately decide the winners of the MLS. We will be following Cahill’s progress with interest over the remaining weeks of the season, and I am sure Evertonians all over the country will have their fingers crossed that Tim Cahill finally receives the success his fantastic career deserves.

One thought on “Tim Cahill to be finally rewarded for successful career?”