My obstructed view this week was not a pillar at the Boleyn Ground, rather a 190 mile distance between Upton Park and Huddersfield where I was at a friend’s birthday celebrations, earning myself the title “unsociable git” as I spent a large proportion of the time watching my twitter feed for 2 hours in the afternoon. Thanks to our dear friends (?) at MOTD, and of course those at Sky, I think I can piece together a few thoughts that those actually at the game can support or slag off. 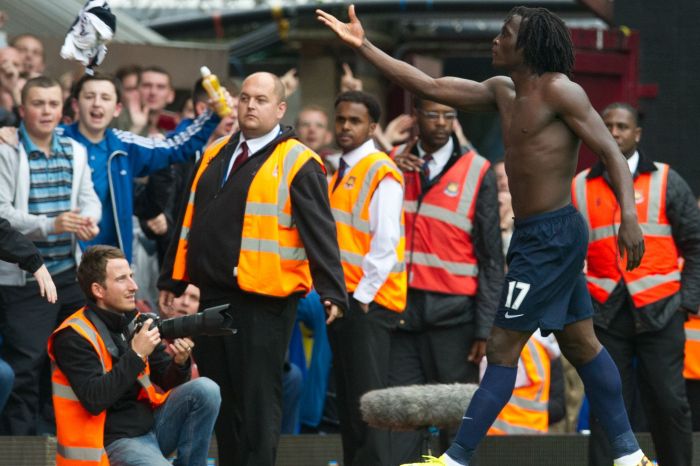 What. A. Game. I am breathless even now, and when I actually saw it on Sky, of course I knew the result, but you could get a sense of the second half atmosphere, and the tension building towards the end and what West Ham fans seemed to think was an inevitable defeat – even from 2-1 up with 7 minutes left. But one has to reflect on an insipid and bland first half, rather reminiscent of the mashed potatoes I ate with my Saturday Night Roast Dinner at the birthday celebrations. At least the potatoes had lumps in it to maintain my interest, not like the 45 minutes of stodgy football on view.

Perhaps Roberto had it right, and the mental and physical exertions of the Chelski game had its roots in that dire first half; but we are talking of 7 days earlier, not a cup game midweek; and Chelsea even had an extra game between our defeat and a comprehensive victory over Fulham. I’m not convinced. Maybe it was a case of “we’ve beaten Chelsea, these will be easy”, comments you’d expect supporters to voice, but not professional footballers. Kill them off in the first 45 mins then if its going to be that easy, and then coast the second half, but no, we seemed to think we had a divine right to victory without any blood, sweat or tears. Clearly Roberto thought something similar if rumours of a half time hair drier are to be believed, because in a move more akin to the (not quite so) Special One (at the moment) across in west London, two substitutions made after that first half display. Funny that Sky couldn’t mount much in the way of highlights, choosing instead to screen far more of the second half. But credit to RM, he moved decisively, didn’t wait to ‘see how things are going after 70 mins’ as DM might have done, and it paid almost instant dividends.

Before talking about that though, what about the two boys substituted, the Hero to Zero Twins. Sad, but Jela 18 months ago scored all his goals after coming to us with virtually only ever one touch; and Nais looked a League 1 player after his close run MoM performance last week.

I can’t work Jelavic out. He gets in to decent positions, the ball has started bouncing off him up top, and he didn’t have a sniff of a chance to cock-up this week. That might be the fact that he had little service, but he made no impression on the game, brought in to stark relief by his second half replacement. What do we do with him? Stick him in as an over-age player in the U21s to try to score a hatful? Persist? Ship out in January? Hard to know, but I like the lad, and as I said after Chelsea, you don’t score the kind of goals he did when he joined us without having real talent. We must stick with him, now likely to be on the bench in favour of Lukaku starting, and still ahead of Kone who looks a tad over-priced after his move from Wigan.

And Jela’s twin crime companion, Naismith. I’m not sure I got enough on the highlights to tell, but he looked a shadow of the man who ran his balls off last week. And if he can’t do that 2 weeks running, then there’s no hope. Play him at Fulham, maybe even against the bar codes if Pienaar is till unfit, maybe even as part of a 4-4-2 if we want to try something different on Tuesday. And after that? Sorry, harsh world, but if he hasn’t performed, squad player until January and then he’s got to go.

Can I talk positives now?

The second half was about as tasty as the Sticky Toffee Pudding (with custard, of course) I had as a dessert on Saturday night. Sticky in patches, but very, very tasty in the majority. Barkley fizzed, and I loved seeing him further forward this week, and he’ll be a handful for any team, and others are likely to try to crowd him out – but his feet are good enough to keep the ball and release someone likely to have more space, and god help the oppo if that player is Mirallas or Lukaku. His cynical tackle (tackle?) just before half time, shows he can mix it, but he better be careful he doesn’t get a name for himself with referees who will book him on reputation if he isn’t careful. I’d probably rest him on Tuesday, but then again, we want to win stuff, he wants to win stuff, and he has got an extra 2 days to recover before Newcastle next Monday.

A small post it note on Ross, and a question. I loved his reaction to the press this last week, and of course I want him to stay. But if Real Madrid or similar came in with an £80m bid, would you take it? Based on what Spurs have done, albeit yet to fire on all cylinders, and provided you could do it within Financial Fair Play Rules, you’d have to give it serious thought.

Oh, and Baines scored a couple of scuffed free kicks……

What a player. What a couple of set pieces. @Everton asked our fave free kicks, and even after yesterday I have to say Newcastle, simply because of the power and precision, the distance, and the fact that I nearly leapt the same distance out of my comfy armchair when it went in. But yesterday was an artist at work. Ok, maybe Juski dodged a bit the wrong way on the first one before trying to recover, but hey, would he have stopped it anyway? And after that, the next one was poetry in the opposite corner. Artist? Poet? What else can I say? Loved his performance all round. Makes you wonder if West Ham had ever heard of him – so much space and time on the ball and some reckless challenges to invite the danger man to try his luck – or rather his art form.

Lukaku made an instant impact. The way he turned Collins not long after he came on reminded me of players half his size, mostly playing for Barca. That was immense, and makes you realise, if nothing else, why Chelsea spent £20m on him (just remember that everyone – we ain’t going to get him permanently – and if we did, it would be for a monster fee which we could only afford if we sold our LeftBackGod for the fee he’s worth, not the one offered). And makes you realise we are on a hiding to nothing – assuming he plays like that all season, Chelsea will have him back and he’ll be their no1 striker; they’ll only not do that if he plays shite, and of course we don’t want that as we can’t expect Kone and Jela to make good his form, considering they don’t know which end of the banjo to hold at the moment, let alone use it to smack a cow’s arse. I loved his performance (Lukaku, not Jela, or the cow) yesterday, and he was the epitome of an Everton No17; we might even let him keep that shirt. What Everton centre forward in recent years played like he did for the second 45 mins (OK, apart from Stuart Barlow)? And hopefully someone has shown him a video of it, because I doubt he’ll remember much after that blow on the head.

The rest? Back 4 were almost unemployed from what I could tell, and Timmy certainly never made a save. We have conceded 4 goals in the EPL – two at Norwich were slightly freaky, a deflection and a pen yesterday – so we’re doing something right. Barry, quieter this week, but such is the nature of his role that he is more likely to stand out when we’re under pressure. Ossie, sorry, not good enough, two weeks in a row, and maybe an injury will force RM’s hand on this one, with Gibbo nearing a comeback. And Kevin, ever lively, is just growing and growing in this Everton side – and I’m not sure if that isn’t the first time he’s played a full 90 mins? Oviedo-baby looked effective, although I was surprised he came on and not Gerard; and Ginger Jim still looks like he’s getting to the pace of the game. In the seconds leading to the penalty he seemed to ‘stop’, or at least switch off for a moment, but otherwise he showed good touches and loads of energy, so I have every confidence in him.

What team for Tuesday I wonder? Can’t wait. And can’t wait to be back behind the pillar at GP next Monday night for more thrills, and hopefully no spills. Someone needs to shackle Ben Arfa.