Everton produced a brilliant second half performance to overpower West Ham and continue their impressive start to the new Premier League season. Leighton Baines and Romelu Lukaku will rightly grab the headlines, but it was the brave double substitution by Roberto Martinez at half time that transformed the game and ensured Everton remained unbeaten in his brief tenure at manager. 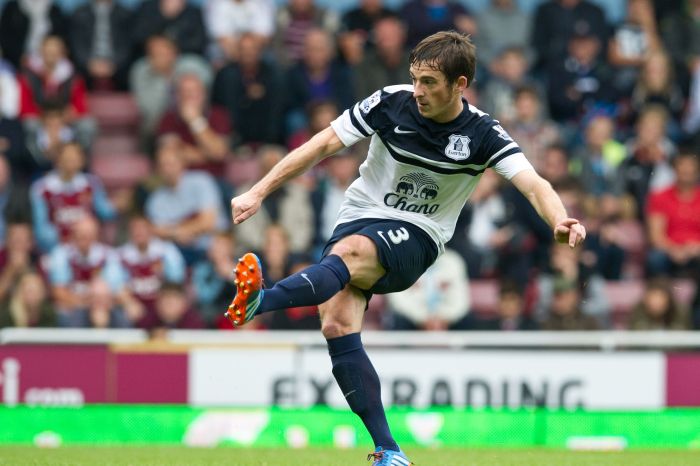 A lot has been written about Leighton Baines throughout the summer and Alan Stubbs didn’t help the situation this week, with misplaced comments, suggesting that Baines would have preferred to be playing in the Manchester derby this weekend, rather than representing the Toffees in East London. However, Leighton Baines is a fantastically loyal footballer, a player and a gentleman of a different generation. The England left back, if he is upset at failing to secure a move to Old Trafford is not moping, instead he has redoubled his efforts and has produced two sterling performances since the transfer window closed.

At Upton Park on Saturday, Baines enhanced his reputation still further, making Manchester United’s £12m valuation of the former Wigan man, look incredibly insulting. Two free kicks, both perfectly struck, one into the top right, the other into the top left, helped Everton secure a crucial three points. There is surely no greater exponent of a dead ball in World football, than Leighton Baines. The strikes took him into second place on the all time goalscroring list for a Premier League defender and few would bet against him powering past John Terry at the top of the list, if he continues to maintain this form.

Baines wasn’t the only player in Everton white to impress, new summer recruit, Romelu Lukaku, making his debut, after signing on a season long loan from Chelsea, looked every bit the £20m striker. If Chelsea have a better centre forward than the brilliant Belgium, then we have yet to see them in action. Standing at just over 6ft 3inchs tall, Lukaku has an incredible presence on the football pitch, but it isn’t just his size and stature that propels him to greatness. His strength, touch and awareness make him the best striker to represent Everton since Graeme Sharp left the Blues in the early 1990s. In 45 minutes, he perfectly demonstrated why West Brom were so disappointed to miss out on his signature, topping a fabulous debut with a brave headed goal that left him unconscious in the penalty area.

It certainly didn’t look so rosy for Everton at half time. A disappointing first half display, with the Toffees lackluster and unable to retain possession in the final third, meant Everton went in at the interval one goal behind. Martinez was furious with the opening period of the game, which featured only one shot on target for the travelling Blues to admire. Rather than sit back and let the game drift for a further 20 minutes, Martinez took decisive action, pulling off the out of sorts, Jelavic and the ambiguous Steven Naismith in favour of James McCarthy and Lukaku.

McCarthy in particular was instrumental in increasing the tempo of Everton’s play, accepting the ball all over the pitch and quickly picking out a teammate in white. In 45 minutes it was easy to see why Martinez was so keen to be re-united with the Irish international. Unfortunately for McCarthy he did concede the penalty that let West Ham take the lead for a second time, but there was others more at fault, particularly Phil Jagielka whose loss of concentration allowed Petric to steal in and set up Nolan to win the spot kick.

However for all the changes Martinez has made to Everton’s style, they have retained the never say die attitude which has made them one of the most difficult sides in the Premier League to beat. The Blues have now played six games in all competitions under Martinez, wining three and drawing three. The fantastic resolve was put to the test on Saturday, but such is the belief in this Everton team, they genuinely believe they are the match for any team in England. Even after they equalised with less than 10 minutes of the 90 remaining, they immediately pushed forward in search of a winner and were duly rewarded, with Lukaku beginning and finishing a move to send Everton travelling back to Merseyside in high spirits.

One thought on “Brave Martinez rewarded for double change”