For many a year I have sat and wondered whilst watching the team sheet be announced why the Everton bench is made up of the players it is. Personally I have always been of the opinion that Everton never look worse than when they sit back, throw another defender on and try to protect a win, something I feel we did far too often under the stewardship of Mr Moyes. Countless times I would find myself watching the last 15 minutes of a game seeing a defender warming up on the sidelines and knowing exactly what was going to happen. The real question I think needs addressing is how Everton, or any team for that matter, can make the most of their bench? 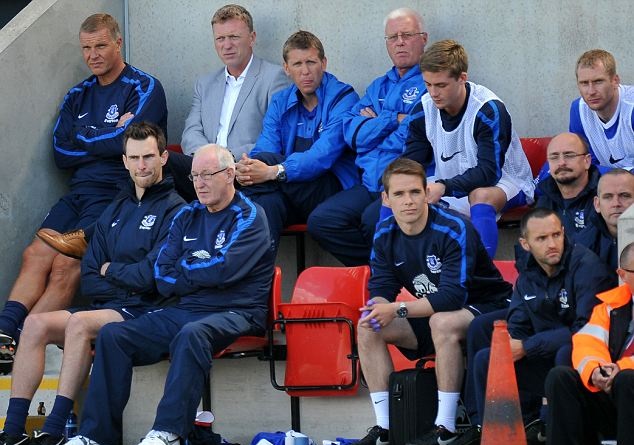 So against Chelsea over the weekend the bench consisted of Robles, Heitinga, Stones, Oviedo, Gueye, McCarthy and Deulofeu, but I would argue the bench should have looked a bit different. To me a bench is useful for three things: firstly it provides cover for injuries, secondly it allows you to change the game with an impact substitution and finally it allows you to introduce new or young players to the first team fold. One of the first things I would consider doing would be to dispense with the second goalkeeper,

Howard isn’t injury prone and in his Everton career to date has never been sent off in the league. Yet we continue to name a goalkeeper on the bench who is never going to get anywhere near the action. We named 2, arguably 3 if you count Oviedo, defenders on the bench; defenders (especially centre backs) do not make an impact on the game and so can only be regarded as valuable substitutes for injury cover. With Stones looking more and more like Martinez’ preferred choice over Heitinga, I would consider it a good idea to remove Heitinga from the squad.

Due to the injury to Kone and the ineligibility of Lukaku on Saturday we were left with Jelavic as the only recognised striker in the matchday squad. Whilst the forgotten man Vellios and youngsters Hallam Hope, Chris Long and Conor Grant were all overlooked. Perhaps it could be argued that a game against title contenders Chelsea is the wrong time to include such players but any of the aforementioned could have offered something severely lacking on the Everton bench. Unless these players are tested at the top-level we will never know whether they are worth continued investment in.

One of the things I’m most proud of as an Evertonian is how we have given youngsters a chance over the years, the fruits of which are being seen at the moment in the blooming talents of young Ross Barkley, but I fear opportunities are being missed by not giving more of these young lads a crack at the big time from the bench. Although I have been delighted to see youngsters given opportunities out on loan, this can only be valuable to a point and eventually they need to be blooded at Premier League level.

Had it been up to me the Everton bench on Saturday would have been: Stones, Oviedo, McCarthy, Kennedy, Hope, Vellios and Deulofeu. Maybe this bench is lacking experience but the fact is that experience doesn’t always equal impact and that’s what has been lacking from the Everton bench over the years. Hopefully the Martinez years will see a ‘stronger’ Everton squad with a subs bench full of exciting talent that can make an impact on the pitch if needed.

View all posts by Chris

3 thoughts on “Why don’t we utilise the bench?”