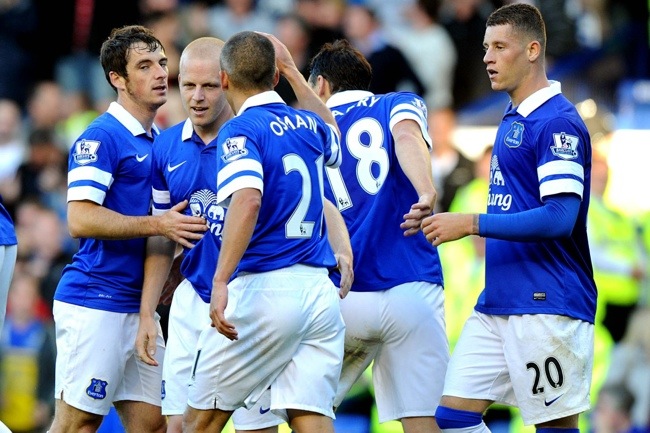 A brilliant performance by the blues against a strong Chelsea side, We did everything required, we closed them down quickly, played nice football and were ruthless when we had a scoring chance. We played the ball around, and actually created chances instead of passing for the sake of it, i thought, despite his lack of recent form Osman grew into the game a bit giving us glimpses of what he can do when he wants to.

It was another stunning performance by Ross Barkley, who commanded the midfield against the likes of Frank Lampard and Ramires. Barry was my Man Of The Match, he got stuck in and won every challenge, he spread the play well, supplying the wingers with some good passes, and also produced a stunning block to deny Samuel Eto’o a debut goal.

Similar to Osman, Naismith has received his fair share of criticism this season, but today he proved the doubters wrong, one goal and one hell of a performance, he beat Cole to everything in the air and was very tidy with the ball at his feet.

The only negative was Jelavic’s performance, i’m a huge fan of him on his day, but so far this season he hasn’t impressed, he couldn’t win anything in the air against Terry and Luiz and when the ball came to his feet he often lost it and got caught out and put us under some pressure.

Once again the back four were brilliant and couldn’t fault any of their performances, Coleman burnt Hazard for pace down the right, and Baines linked up well with Mirallas at times and looked dangerous. After the goal we didn’t do what most teams would against Chelsea and just sit back and try to defend wave after wave of attack, we really got up in their faces, and got stuck in, the stats really give a false impression, they didn’t look that dangerous, Eto’o could have scored once or twice but apart from that it was a solid performance, hopefully this result will now kick start our season, on wards and up wards blues!

One thought on “The Blue Match Review: Everton deservedly victorious against Jose’s Chelsea”