After a two-week break the Premier League is back, with Everton hosting Chelsea in a Saturday tea time fixture. With three draws from his opening three fixtures as Everton manager, Roberto Martinez will be looking to secure his first Premier League win since taking over the Blues. 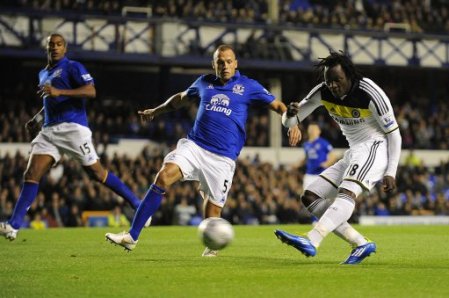 It doesn’t get much tougher than facing Chelsea, the Londoners are one of the Premier Leagues billionaire clubs and Jose Mourinho has an embarrassment of riches at his disposal. Despite this, the Pensioners have performed disappointingly in the Premier League in recent seasons, and although they beat Everton home and away last season, they do not have the best record against the Toffees in the last few years.

In the last six Premier League seasons, Chelsea have only recorded one league victory at Everton, that being the aforementioned victory last season. Prior to that, Goodison had been the scene of some memorable occasions, with the passionate crowd, cheering the Blues to three brilliant victories.

Roberto Martinez will be hoping the Evertonians get behind his team in this tricky fixture and with two new signings available for the first time, he has plenty to consider in his team selection. Gareth Barry and James McCarthy are both in contention for a starting birth, although fellow new boy, Romelu Lukaku will have to wait until next week for this debut, as the Belgium striker is ineligible to play against his parent club.

Another of the summer recruits, Gerard Deulofeu is pushing for his first Premier League start after impressing in the last two matches, firstly against Stevenage in the Capital One Cup and then as a late substitute against Cardiff. Everton certainly need to find a cutting edge to add to their possession play, with the Barcelona loanee threatening Pienaar and Mirallas for a place in Roberto’s first eleven.

Darron Gibson and Antolin Alcaraz remain short of match fitness and are unlikely to feature and Seamus Coleman is currently nursing a few knocks and bruises after playing for Ireland in midweek. Apart from that, Everton have a clean bill of health and Martinez faces a number of difficult decisions. One such decision is whether to play Leon Osman. A stalwart for Everton for a number of years, the Academy graduate has been desperately short of form so far this season, although Martinez may feel his experience will serve Everton well in this type of match.

For this week’s archive footage we haven’t gone back that far. Perhaps Everton’s most impressive victory over Chelsea in recent seasons arrived in at Stamford Bridge in 2011 for an FA Cup fourth round replay. After the initial tie ended all square at Goodison, Chelsea went into the replay as huge favourites. The Londoners looks destined to justify that tag when they led with only seconds remaining, however a quite brilliant free-kick from Leighton Baines levelled the scores on the stroke of 90 minutes, before Everton won the match on penalty kicks.