When Ross Barkley joined England regulars Phil Jagielka and Leighton Baines at Wembley for Friday’s World Cup qualifier with Moldova, Everton had three current players on the pitch for England for the first time since 1988, when Gary Stevens, Trevor Steven and Dave Watson all took to the field in the European Championship group stage match with the Soviet Union. But this growing influence on the England international setup has been building over a number of years and may yet grow stronger over the next twelve to twenty-four months. 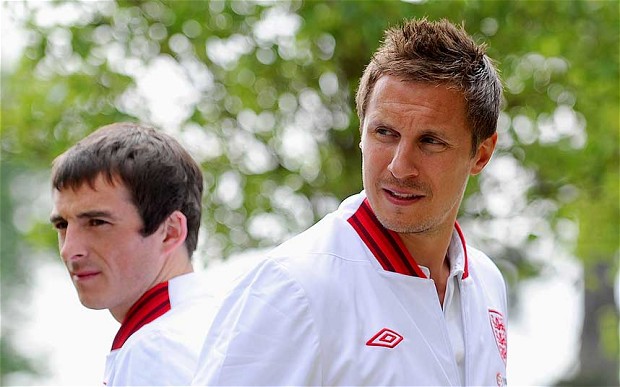 In the last year, four Everton players have represented England in competitive internationals, with Leon Osman joining Jagielka, Baines and Barkley on the international stage. In addition four former Everton players have made England appearances during this time, Norwich City goalkeeper John Ruddy, Manchester City defender Joleon Lescott and midfielder Jack Rodwell and Manchester United centre forward Wayne Rooney. This ensures it is Everton that have the biggest influence on the current England squad.

Everton have always had a high quality Youth setup that has produced international class players who have gone on to represent the three lions, but it is a great credit to recently departed manager David Moyes that it is now common place for Everton to have a significant party travelling with the England squad. Before he inherited the Everton hot seat from Walter Smith, it had been rare for Everton to have one let alone three current players in the England set up. Over 11 years, Moyes rebuilt Everton’s reputation, signing quality players from the Championship and developing them into top class Premier League players almost demanding international recognition. Speaking to the press ahead of England’s game with Ireland in May 2013, Phil Jagielka revealed the brilliance of Moyes and thanked him for developing him into a first choice pick for England.

“David Moyes gave me a chance to play at a higher level, coached me to a better level and helped my game progress.

“Over the last six years he has taken me from possibly being a Premier League defender to playing some games for England.”

Everton could yet have a further two players making the trip to the World Cup in Brazil. Gareth Barry has 53 international caps and is hoping his recent move to Everton will propel him back into the England set-up. Barry hasn’t featured for England since shortly before Euro 2012, but will hope that a string of impressive performances for the Toffees will grab the attention of England manager Roy Hodgson. A long shot for inclusion is John Stones. The former Barnsley trainee is almost guaranteed to play for England in the near future, although next summers World Cup may come too soon. Stones is hugely talented and is equally comfortable at Centre Back or Right Back. Now a regular in the U21 set-up, Stones was one of five Everton players who played for England at the U20 World Cup in June.

England disappointed in the U20 World Cup, but the entire squad will have benefited from the tournament experience. Ross Barkley has already propelled himself straight into the full national squad, John Stones is now a U21 international, with John Lundstrum, Luke Garbutt and Chris Long all looking to go out on loan and get some Football League experience to enhance their burgeoning careers.

Not since Everton most glorious decade, the 1980’s, have England had such a hint of Blue. On the back of winning the Division 1 Championship in 1985, Everton had five players in the England squad, with Stevens, Steven, Reid, Bracewell and Lineker all pushing for inclusion in the 1986 World Cup squad. But for an injury to Bracewell they would all have travelled to Mexico 86. In another World Cup year, Everton will be hoping that the latest crop of England internationals can have half that impact and return Everton to the winners circle for the first time in 19 years.