Ahead of our Capital One second round tie against Stevenage, we spoke to Pete at BoroGuide to try to find out a little bit about our League One opponents. Everton have never played against Stevenage before, so it will be a night of firsts at Goodison. 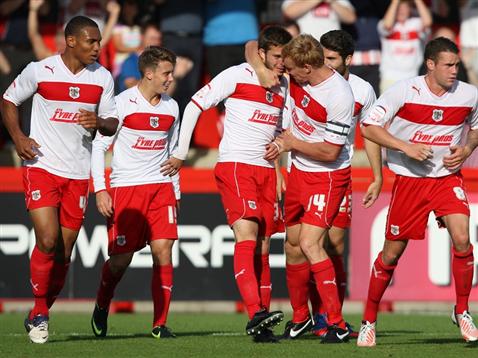 Read on to find out why Pete thinks Everton might struggle to compete in the top half under Martinez, who we should look out for in the Stevenage team and how Boro became the first side to lift a trophy at the New Wembley.

Tell us a little bit about Stevenage, what is the history of the club and how have the team done since promotion to the Football League in 2010?

We were formed in 1976 after the town’s previous club, Stevenage Athletic, went under. Athletic were only around for eight years, having replaced Stevenage Town themselves. Our first season of senior football is generally regarded to have been 1980, joining the United Counties League.

Barring the one relegation in 1988 – it has been an upward curve ever since. Promotion to the Football League in 2010 was our ultimate aim, but getting that promotion to League One at the first crack was beyond the expectations of most. Last season wasn’t terrific, but we’ve generally found life in the League comfortable.

Until the cup draw I wasn’t aware the club had dropped Borough from their name. How and why did that happen and how did the fans react? Obviously it remains important to the supporters, hence the name of your site?

The chairman decided to remove the Borough from our name after promotion to the Football League in a move that he felt would distinguish between the two eras of the club – the non-league Stevenage Borough and the Football League Stevenage. Reaction was mixed; around half thought it was a silly thing to do and the rest weren’t particularly fussed. But the chairman also said at the time that Boro’ would remain our nickname – just that the reason for that nickname had been removed! In his words: “We’re still the Boro’, it’s still our nickname, we will always be the Boro’.”

The club have quite a rich cup tradition and were the first side to lift a trophy at the new Wembley. How was the whole experience?

The 2007 FA Trophy final was an amazing occasion. More than 53,000 piled in to Wembley for the experience and to win the cup – our first major honour – in the manner that we did was sublime. You couldn’t have asked for a better Wembley final – to have been two down at half time, and to win it in the 88th minute. Amazing. The two times we’ve been back since haven’t really compared.

With Bradford reaching the final last season, all clubs, whatever the division must have aspirations of making the trip to Wembley. What are your hopes and dreams for this years competition?

We’ve not had a brilliant time of the League Cup since we came up to the Football League. In fact, Ipswich is only the second time we’ve won in the competition (AFC Wimbledon being the other). We’re certainly under no illusions that this is probably as far as we go in this year’s competition, but at least we’ll swell the coffers a bit and get a great night out to boot. Bradford didn’t get a Premier League team until the 4th round last season – we’ve got one in the 2nd!

How has your season gone so far?

Not good. Apart from the win against Ipswich, we’ve lost three of our opening four league games. The squad is a relatively new set of players so there’s some gelling to be done and we’re getting there. The manager has been bullish about the results, but that’s how he operates – full of confidence and positivity. We’ve scored four times in four games and three came in the same game; that’s another area of concern.

What are your hopes for the season? Where do you think Stevenage will finish?

Don’t tell the manager this because he’ll not be happy with me, but a progressive mid-table finish would be fantastic. If we can get our form together soonish, I wouldn’t rule out a Dark Horse charge to the playoffs, but look at the clubs (and finances) we’re going head-to-head with – you have to be realistic I feel.

The two sides have never met before, how has news of the draw gone down in Stevenage? Are you looking forward to the trip to Goodison? Are you expecting a large travelling contingent?

We’re very happy. One or two people had expressed a hope to draw the red half of Liverpool on our Borochat forum (not sure why), but we’re very happy with the chance to go to Goodison Park and there’s a lot of enthusiasm (among those who get the opportunity to go!) about the night and the occasion. I think we’ve sold more than 500 tickets now – I know that doesn’t sound much to you guys, but for a Wednesday night at relatively short notice and for the size of our fanbase, that’s always decent!

What were your thoughts on Everton over the last few seasons under David Moyes?

David Moyes’ Everton was a solid, consistent side who were capable of getting results. The season after the Champions League campaign that involved flirtation with relegation was an anomaly and you would always think Everton able to challenge for at least sixth or more. And for a while, Everton were arguably stronger than Liverpool with that consistency.

We are under a new manager for the first time in 12 years, what are your thoughts on Roberto Martinez?

Not sure Roberto Martinez is the right man for Everton. He did a tremendous job at Wigan Athletic but that was a different situation – balancing a relatively modest budget with a team always among the favourites for the drop. Everton is a much larger club and I do wonder whether he is up to that transition. But you could say the same about Moyes and Manchester United!

Where do you think Everton will finish this season?

I think the competition has got stronger in terms of clubs able to push for the top six, particularly Swansea and maybe even Norwich – therefore, I think Everton might be finishing around 9th or 10th this season.

Which Everton player do you most admire?

It was Lee Carsley – but I have to say that, given he’s my mum’s cousin. At the moment, it’s hard not to like Leighton Baines… he isn’t far off being the best English left back in the top division.

On the new Football Season

Who do you think will be…

The Capital One Cup winners?

Player of the Year?

What is your score prediction?

What do you expect to be the Stevenage starting XI?

Day; Smith, Ashton, Charles, Hartley; Shroot, Dunne, Doughty, Freeman; Tounkara, Lopez — but expect Sam Wedgbury to come back in at right back if he is fit, with Smith replacing Shroot in the midfield. And if Luke Jones is fit, he’ll oust Peter Hartley I reckon.

Tell us a little about the squad, have you got any hot prospects who will be running out at Goodison?

Luke Freeman is a player reborn after Graham Westley returned; the lad Doughty has come in on loan from QPR and looks a real talent; and Dani Lopez will be a deadly striker in time.

Which Stevenage player should we look out for?

Jon Ashton – built like the proverbial… in the centre of defence.