Each week we look in-depth at the performance of a member of the Everton team, breaking down their display, looking at both the positives in their play and areas for improvement. We will try to break down some of the general misrepresentations that the football media regurgitate week after week and provide a detailed analysis of individual player performance. For the second in the series we look at Manchester United target Marouane Fellaini, focusing on his performance in the recent Premier League fixture against West Bromwich Albion.

The future of Everton’s most prized midfield asset, Marouane Fellaini has grabbed column inches in the national press throughout the summer, with the colossus Belgium linked with a big money transfer to Arsenal and Manchester United. At the moment of writing, the fact remains that Fellaini is an Everton player, with neither club activating his well reported release fee, which expired on 31st July, or since agreed on an acceptable price with the club. Fellaini for all the news coverage about his future has not at anytime caused a fuss, nor has he refused to train and he continues to perform for Everton, treating the club with the utmost respect. However, despite Roberto Martinez maintaining that Fellaini continues to give his all for Everton, the former Standard Liege player has become, rather unfairly, the focus of supporters ire on Twitter, internet Forums and Radio phone-ins.

Fellaini has always distanced himself from newspaper reports in his homeland where he or his father have been reported to hint at a future away from Everton, however these reports are regularly used by fans to justify their anger and disappointment whenever his performance levels drop anywhere below the sublime. This was very much the case at the weekend, when despite producing a strong midfield performance, a number of Blues took to the internet to slam Fellaini and claim his head was clearly focused on a move to Manchester United.

Since the appointment of Roberto Martinez, Fellaini has played in his preferred deeper midfield role, operating in front of the back four, providing protection to the defence and dictating the Blues quick and simple passing style. The first graphic below, demonstrates Fellaini’s undoubted strength in the tackle, winning all five tackles, the most of any player in the entire match. All but one tackle was in or around the half way line, which demonstrates perfectly the excellent work rate of Fellaini, who worked tirelessly to close the West Brom attackers down quickly and effectively. Out of seventeen 50/50 duels, Fellaini appeared with the ball on ten occasions, he also used his height to great effect, winning four out of five aerial battles. Most importantly, when the ball was given away, Fellaini was quick to win the ball back, recovering the ball on six occasions. 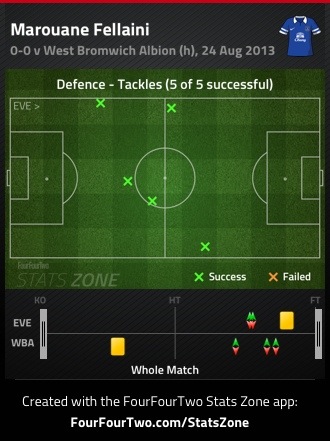 The second graphic demonstrates further the important work completed by Fellaini in a defensive capacity, with a lot of running going unnoticed by a large proportion of the home crowd.

This heat map shows the ground covered by the Belgium throughout the 90 minutes and evidences that not only was Fellaini important in disrupting West Brom, he was also Everton’s most prominent attacking player and was certainly unlucky not to score when his late shot deflected back of the inside of the post. His work rate was such that his influence on proceedings throughout the game was only matched by Leighton Baines, with Phil Jagielka and Seamus Coleman also heavily involved.

Fellaini has often been criticized for his lack of discipline, but that has not been evident at all in the first two games of the new season. Martinez has instilled an element of calm in Fellaini’s play, with the Belgium only conceding two fouls in the entire ninety minutes. This is a significant improvement on last season, when several niggly fouls resulted in Everton surrendering dangerous attacking positions.

If Fellaini excelled in a destructive manner, he was also integral to the Blues in building possession. His passing was strong, completing 85% of his 66 passes, the highest number of passes attempted by any player in the game. His completion rate was down on the previous week at Norwich, where again he was the top passer in the game, but with an excellent completion rate of 91%. 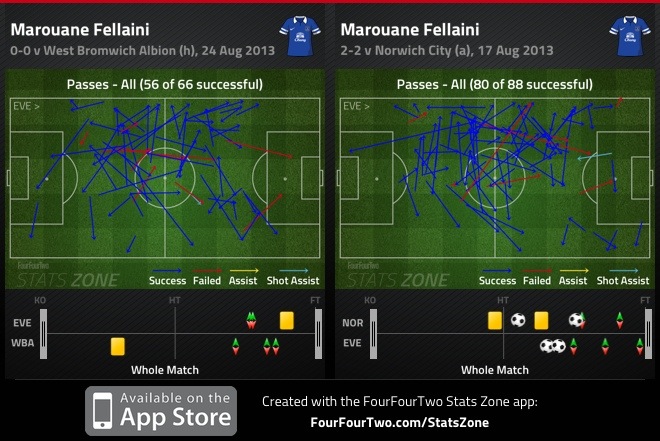 This was far from Fellaini’s best display in an Everton shirt, but to suggest a lack of committed to the Blues cause is totally unjustified and unfair. We have seen throughout the summer, several top players using the media to publicly voice their unhappiness and criticize their team and then producing half-hearted performances in pre-season games. This cannot be said of Fellaini, who at times does comes across as moody (Wigan, FA Cup Quarter Final) and clearly has a short temper, but as Martinez has maintained throughout the summer, he has demonstrated an excellent professional mentality.

It is always frustrating when a top player looks destined to leave the football club, but it is unfair to criticize a player who continues to gives his all for Everton.

Do you agree or disagree? Do you want Everton to keep Fellaini or is now the time to cash in? What price is acceptable?