The Roberto Martinez Goodison revolution has been gathering pace throughout the summer, with a genuine feel good factor providing a belief that the fabulous team established by David Moyes will develop and improve under the skilful leadership of the new Spanish manager. Martinez has already spoken about the importance of youth and while the signing of Gerard Deulofeu attracted the headlines, it is homegrown talent Ross Barkley who has the potential to become the star of Roberto’s Everton. 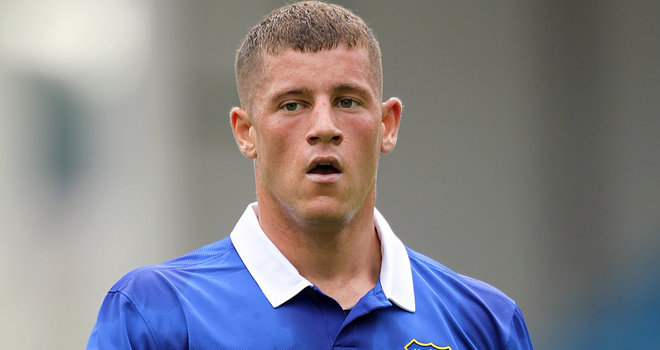 Until now, Barkley has been a fabulous talent held back by injury and reluctance by the previous regime to fully trust his development in the ultra-competitive Premier League.

In 2010, aged just 16 years old Barkley was named on the substitute’s bench for Everton’s Premier League match at Newcastle and looked set to be the latest star to emerge from the Blues Academy at Finch Farm. However the starlet was to suffer a horrific injury while on England duty, breaking his leg in three places after an accidental collision with a teammate. That put him out of the first team picture for the remainder of the season, but he appeared to have put all that behind him after a fruitful pre-season in 2011-12 earned himself a starting spot for the opening fixture of the new season against QPR. Barkley was a revelation, playing with a youthful exuberance and uninhibited by structure and responsibility. Unfortunately this didn’t sit well with David Moyes who decided that he was unable to risk the young Barkley at Premier League level, instead preferring the security of an experienced player, able and willing to follow team instructions.

“I have played with some great players in my career but I do not think I have ever seen a talent like Ross.

“He is so mature for his age and I think he is going to be a massive asset to Everton in years to come.” Tim Cahill, Everton icon and hero.

Barkley’s development somewhat stalled as a result and loan spells at Sheffield Wednesday and Leeds United followed. On his return from Yorkshire, Barkley was thrust back into the first team picture, appearing occasionally from the bench and then starting important games against Tottenham and Arsenal. It was in the latter game where Barkley really impressed. Playing in his preferred central position, just off the striker, Barkley looked every bit the Premier League player, an effortless running with skill, power and strength to boot, Barkley appeared ready for a regular starting spot. Bizarrely, Moyes decided to minimize the involvement of Barkley in the seasons remaining fixtures and he would have been relieved to see the back of the Scot, when he moved on to manage Manchester United.

As we approach the new Premier League season and the first under the leadership of Roberto Martinez, young Barkley, now 19 years old, has been heavily involved throughout the pre-season campaign, producing impressive performances against Blackburn Rovers, Juventus, Real Madrid and Valencia. Martinez has trusted Barkley with the key midfield role at the pinnacle of the midfield triangle and the Wavertree born Evertonian looks set to be an influential performer in Martinez’ new look Blues.

Speaking to the Liverpool Echo, Martinez explained the importance of youth in his new set-up and focused in particularly on the excellent performances produced by John Stones, Gerard Deulofeu and Barkley while the Blues were in the United States.

“I saw a lot of our young players and they’re going to have big roles in our season so in that respect I’m very pleased. I’ve taken a lot of information in.”

Barkley has certainly produced enough in those games to show he is ready to make an impact on the Premier League. At 6ft 2 inches tall, Barkley is an imposing figure in midfield. He is naturally quick, especially over the first 10 metres and is comfortable in possession. This is a key attribute for Martinez, who will expect his entire midfield to be confident on the ball. In the tactical model employed by the Spaniard all players will see plenty of the football, they must be prepared and able to take the ball in difficult situations and use it intelligently to retain possession. One of the most pleasing elements of Barkley’s performance against Valencia was in his response to giving the ball away. He didn’t hide away, instead he continued to demand the ball, he continued to run at the opposition defence and he continued to try to play football in the Martinez way. It would be very easy for a 19-year-old to play the safe percentage ball, but Barkley wants to be involved in the right areas of the field and he is a genuine threat for that reason.

It will take a big call from Martinez to play Barkley in the opening fixture against Norwich. He would appear to be in direct completion with Steven Pienaar for the central midfield role, although Pienaar could play wide left instead of Naismith and Deulofeu, allowing both the South African and Barkley to start the first game. The final pre-season game against Real Betis at the weekend may provide us with an insight into Roberto’s thoughts, but whatever the outcome the 2013-14 season promises to be huge for Ross Barkley and with a World Cup at the end of the season, who knows how far Barkley could go.