It is often said you learn more in defeat and this is certainly true in the case of Everton’s narrow and unfortunate defeat to Real Madrid. That is because Roberto Martinez will have left Dodger Stadium knowing that his Everton team are more than capable of mounting a top 6 challenge in the Premier League this season after the Blues produced another uplifting performance against the full might of Real Madrid. 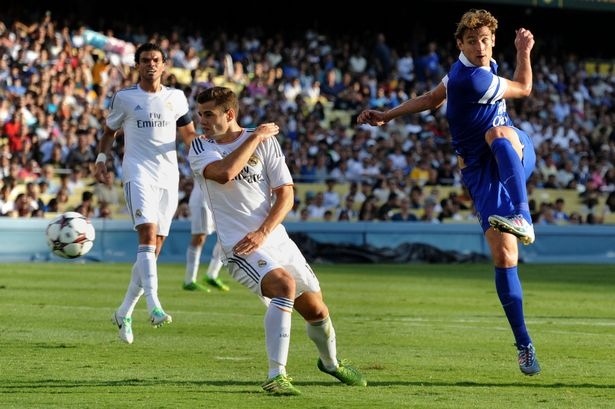 This always promised to be a difficult fixture and that was more than apparent when Carlo Ancelotti chose to name a full strength side. Martinez on the other hand was true to his pre-match thoughts and selected a starting side with the bigger picture in mind.

Everton again started brightly and moved at ease from the 3-4-3 formation from the Juve game to a starting 4-3-3 for this match in Los Angeles. Martinez has already demonstrated an eagerness for true flexibility and he will adapt the line-up depending on the opposition. With players equally adept in a number of positions, the Everton squad inherited by Martinez should ensure that Everton are well prepared for each fixture.

The back five had a familiar look with Howard lining up behind Baines, Coleman, Jagielka and Distin, and unfortunately some of the old frailties from the previous regime remain. In the opening 45 minutes Everton had far too much respect for their illustrious opposition, playing a high line and allowing the pacey Madrid forward line too much space between the defence and Tim Howard’s goal. Far too often Ronaldo was allowed to drift between the centre backs and with the talented Portuguese in space the gifted Madrid midfielders were able to pick him out time and time again. This led to the two Madrid goals, both had a touch of offside about them, but Everton failed to pick up on the early warning signs and mistakes in midfield were quickly punished by lightning quick counter attacks. This seemingly obvious failing frustrated Martinez, but pleasingly he was able to make half time adjustments to nullify the threat. The Blues suffered the same problem last year against quality opposition, with Manchester United and in particular Robin van Persie punishing Everton in similar fashion. The Blues appear gripped with fear when playing top sides, choosing to play a high offside line rather than trusting their defensive qualities to combat the obvious threat. Martinez will know he has to remedy this, but if mistakes are to be made and frailties identified then preseason is the time to do this.

The Everton midfield enjoyed a mixed first half. At times they made costly mistakes, giving the ball away and putting undue pressure on the defence. However when they got it right, Everton played exciting attacking football, creating numerous opportunities and in truth Everton were unfortunate to go in at the interval two goals behind. With Johnny Heitinga and Leon Osman playing in the holding roles, Marouane Fellaini operated further forward, just behind a front three of Naismith, Mirallas and Kone. Naismith enjoyed his best afternoon in an Everton shirt and Mirallas continued his strong pre-season. With the Everton full backs supporting the wide players, the Madrid full backs struggled to cope with the Blues attacking intent down the wings. Everton should have been awarded a penalty when Mirallas cut inside on the right and was hauled down by Pepe just inside the box. It was an obvious foul, but the referee decided that the infringement took place outside the 18 yard area and the Madrid cleansheet remained intact.

Further controversy followed when a Sylvain Distin header was ruled out for an apparent push on Khadera. The goal would almost have certainly stood in the Premier League, but Madrid were cleverly influencing the referee, who was under constant pressure from several star players and Everton were left to rue another poor refereeing decision.

If Everton had looked okay in the opening 45 minutes, they were much better in the second half. Martinez ensured that the defence dropped slightly deeper and with Jelavic now operating in attack the Blues looked much more likely to threaten the Madrid goal. It was no surprise when the lively Croatian pulled a goal back after a lovely free-flowing move from the Toffees. A deep cross into the area was cleverly headed back across the box my Naismith and Jelavic produced a brilliant and instinctive first time finish. Jelavic has looked confident throughout the preseason and with 3 goals to his credit already he will enter the season in high spirits.

Everton continued to push for an equaliser and were unfortunate not to get back on level terms. Several substitutions didn’t upset the Blues’ momentum and Ross Barkley produced another impressive cameo. The youngster who struggled for opportunities under Moyes is relishing the freedoms granted to him under Martinez and Barkley will have a key role to play this season. Gerard Deulofeu made his first appearance for the Blues as a late substitute and although he had little opportunity he did produce an exciting run and cross that hinted at his fabulous talent. John Stones and Bryan Oviedo were given further opportunities to impressive and Martinez’ inclusive style has given the squad a much stronger feel, even if it has only grown by one in terms of overall numbers.

The Blues now move on to Miami and the final game of the tournament. The opposition have been of the highest quality and even if the organisation of the International Champions Cup has left a little to be desired, Everton have certainly benefited from their involvement. It would be hoped that a similar programme is followed in future years, but the true test of how successfully it has prepared the Blues for the season ahead will be Norwich City on August 17th.

One thought on “Martinez learns much in defeat”