The influence of Leighton Baines was perfectly demonstrated on Sunday afternoon. With Everton struggling to breakdown a stubborn Austria Vienna rear guard, the Kirkby born full back darted forward down the left hand side, collected a fantastic pass from Darron Gibson in his stride, before delivering a perfect cross onto the head of Apostolos Vellios, the young Greek Centre Forward unable to miss as he finished well to bring Everton back into the game. 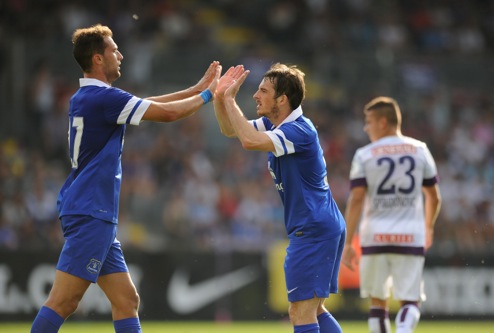 Not only is Baines an astute defender, he is undoubtedly Everton’s most potent attacking presence. Indeed, Baines is the most creative players in Europe, creating 102 opportunities for his team mates last season, the most of any player across the main European Leagues. Add that to the 7 goals he scored last season, it is plain to see why Roberto Martinez and the Board are so keen to ensure Baines remains a fixture in the Everton starting eleven next season.

During the weekend, rumours of a new five-year contract surfaced much to the delight of the Evertonians. The capture of Leighton Baines on a long-term deal would represent the best business of an already excellent summer. Baines, an unassuming personality is unlikely to rock the boat, but Everton have recognised his excellent service to the football club and are expected to make him the highest paid footballer at the football club, and rightly so.

Of course, when you have a player of significant ability, you are always likely to attract external admiration and the list of suitors interested in Leighton Baines is significant, the most concerning being that of former Everton manager David Moyes and his new employers Manchester United. Moyes is an obvious admirer of Baines’ talents and has reportedly had one offer of £12 million rejected out of hand by Everton, who were quick to issue a “hands off” and a “not for sale” message to United and any other interested party. Whether that is enough to deter any further moves by the current English Champions remains to be seen, but Everton will be looking to secure Baines’ future at the football club for the long-term.

The next stage in Leighton Baines’ career is to establish himself as England’s number one choice at left back. With 17 international caps to his name, Baines has become the leading contender to challenge England’s long standing left back Ashley Cole. Baines is now widely considered to be the best sided defender in the Premier League (recognised by the PFA as the best left back for the last two seasons), it is only Cole’s experience which has continued to delay Baines’ natural progression to first choice at number three. With the World Cup on the horizon, Baines will see next season as hugely significant in satisfying his international ambitions. The main concern for Evertonians, is that Baines decides the only way to convince Roy Hodgson of his credentials is to play regularly in the Champions League, however moving to a new club can have a negative effect on form and confidence and with only 11 months until the start of Brazil 2014, a move away from Goodison Park would represent a significant risk for Everton’s greatest ever left back (?).

2 thoughts on “The importance of Leighton Baines – contract discussions underway”