Roberto Martinez has started the process of fine tuning his Everton squad ahead of his first season in charge of the Blues. The new Everton manager was quick to recognise the expertise he inherited but spoke passionately of the need to recruit suitable reinforcements to ensure the Blues are able to make a sustained push at the Premier Leagues top 4 places. 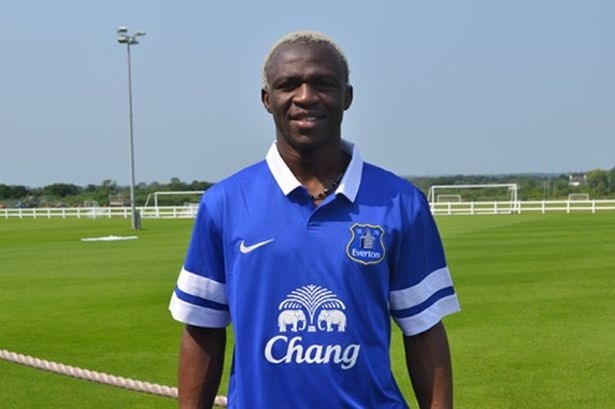 The first of those new signings was completed yesterday with the arrival of Arouna Kone providing much needed competition in the striking areas. Kone was a regular scorer for Wigan last season and Everton will be hoping that the Ivorian can maintain his excellent goals to game ratio at the Toffees. Kone provides an alternative to Everton’s other striking options, with Nikica Jelavic looking to put a difficult second season behind him and return to goal scoring ways. Victor Anichebe will be looking to make an impact on his new boss, but the most exciting prospect could see Kevin Mirallas employed in a more attacking role, providing the Belgium with the opportunity to use his blistering place to attack Premier League defenders.

Everton have repeatedly been linked throughout the summer with a move for Victor Moses and the Nigerian international would be an excellent addition, providing options out wide and in attack and is another known to Everton’s new Spanish manager following his time at Wigan Athletic. The main stumbling block to any deal is the size of the transfer fee, although a one year loan deal with an option to purchase at the end, could prove the perfect solution for Chelsea, Everton and Moses.

The Everton midfield has been in need of re-enforcements for a number of seasons and various media outlets have continued to link the Blues with former target Leory Fer. The Dutch international has a good pedigree, but he was predominantly a David Moyes target and although the club have continued to monitor his progress it remains unlikely at this stage that Fer features heavily in Roberto Martinez’ thoughts. A more likely option is West Ham midfielder Mohammed Diame, another ex Wigan man, currently playing for Sam Allardyce at West Ham United. Diame is a big powerful runner and is well known to Martinez. He does however have a tendency to disappear from games, particularly when the match isn’t going his way and this will be a concern for the Everton management. A typical example of this was the meeting between Everton and the Hammers at the end of last season, when Diame was subbed at half time with him looking totally out of his depth.

Defensively Everton are on the verge of completing a 2 year Bosman deal for Antolin Alcaraz. The Paraguayan has a big reputation and has made a strong impression in the Premier League. With his contract up for renewal and Wigan dropping out of the Premier League, Everton have moved quickly to secure his signature. With just minor details still to tie up, Alcaraz is on the verge of becoming an Evertonian and will likely fly out on tour with the Blues later today (Tuesday).

In goal Everton have assessed a number of targets, with ex Liverpool keeper Scott Carson one player considered. However, Martinez’ first choice option would be to recruit Joel Robles from Atletico Madrid. The highly rated Spanish u21 International spent last season on loan at Wigan and would provide genuine competition for Tim Howard. The USA international would be expected to start the season between the sticks but would have to play at a high standard to keep the exciting young keeper out the side.

Whoever comes in to the club it promises to be an exciting period for Everton. Understandably, Martinez has so far concentrated his search on players well known to him and his coaching team, with each player linked to the Blues having featured recently for Martinez at Wigan. Everton’s restrictive transfer budget is likely to have contributed to the conservative approach from the new Everton boss, let us know what you think and whether Martinez should be looking further afield for new recruits.