Five minutes after we put this article up, Carson signed for Wigan…on to the next one!!!!

With the protracted, but likely signings of Alcaraz and Kone continuing to rumble on, Everton and Roberto Martinez are continuing to plot out their transfer strategy, with a move for a goalkeeper, primarily to provide genuine competition for Tim Howard, next on the agenda. 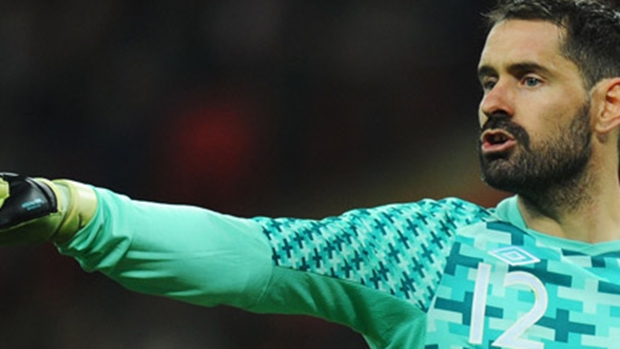 Martinez, who spoke about his transfer plans with evertontv at the beginning of the week, spoke about recruiting to all areas of the squad.

“I think we need to bring in three or four new faces – one per unit, and make sure we get an extra option or dimension into the squad.”

Goalkeeper is certain to be one of those areas, with Everton particularly exposed following the departure of Jan Mucha after the Slovakian’s contract expired on 1st July.

Two names are being talked about extensively, Joel Robles the Atletico Madrid keeper who spent last season on loan with Wigan is understandably a contender, especially considering his excellent form in the second half of last season where he disposed Al Habsi as first choice keeper at the DW Stadium. The second name is rather controversially, the ex-Liverpool and former England keeper, Scott Carson.

Carson would be an interesting choice and is sure to split the Evertonians. Despite only featuring 9 times for the Liverpool first team, there are many Blues who would find it difficult to support the 27-year-old keeper who graduated through the Leeds United Youth system before securing a move to Anfield in 2005.

Carson spent much of his time at Liverpool out on loan, with spells at Sheffield Wednesday, Charlton and Aston Villa, before he moved on to West Brom in the summer of 2008. He quickly established himself as number one at the Hawthorns, but found himself in and out of the side when the club returned to the Premier League and was eventually sold to Besiktas in Turkey two years ago. Rumours this summer have strongly linked him with a return to England and in particular Wigan Athletic in a £400,000 transfer. However, with Wigan so far failing to finalize a deal, Everton are reported to have stepped in with an interest and could look to wrap up a transfer in the next couple of weeks.

Should Carson decide he would prefer the option of regular first team football at Wigan, Roberto Martinez may return to his native Spain to secure the signing of Joel Robles. The 23-year-old Spanish keeper is highly though of and certainly impressed in last season’s FA Cup Final. Despite this, he is expected to be surplus to requirements again this season with Atletico, with the Spanish giants signing Chelsea keeper Thibaut Courtois on loan for the third year in succession. He is likely to cost significantly more than Carson, but with only a year left on his contract in Spain the fee is unlikely to be prohibitive for the Blues.