Today, July 1st, the first official day in charge for new manager Roberto Martinez. The start of a new era at Goodison Park, a new dawn for Everton Football Club, the beginning of a period of adjustment and transition for the Blues and yet despite the inevitable change in style and personnel, it is a firm belief that Everton will yet again finish in the top seven. 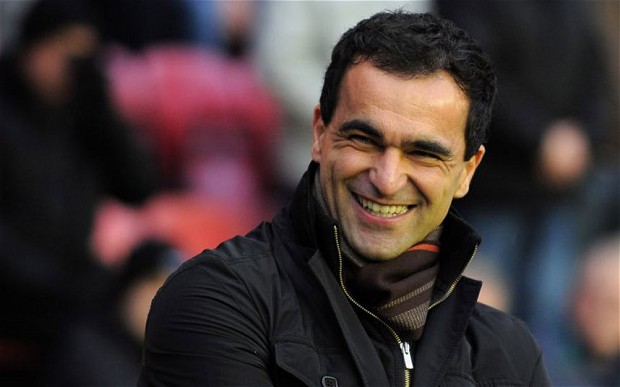 Martinez is an excellent appointment by Bill Kenwright and Everton. He is certainly the right man for the job, bringing with him modern ideas and approaches that will see a return to the days when Everton were known throughout English football for their wonderful passing game that earned the team the nickname, the School of Science. But any period of transition brings concern over results. Can the manager bring in the players he needs to take the club forward? How quickly will the new signings bed in? Will the current squad take time to adjust to the change in approach? These concerns are understandable and have, not surprisingly been evident on Twitter and the various Everton forums, especially in the last week or two, as concerns grow over the lack of incoming signings.

What is hard to understand, is why some people are fearing for the future of the football club, because the lack of quality in the Premier League will ensure Everton finish at least in the top seven, and whisper it quietly but Martinez may actually do better than Moyes! Was Moyes the brilliant over achieving manager that the press would like you to believe or was he instead placing restrictions on Everton through his negative playing style and cautious approach in the transfer market? Is the glass ceiling Everton are consistently banging their head against self-imposed? Would a more adventurous and open approach propel Everton alongside Spurs and into a genuine battle with Arsenal for the 4th Champions League place? Leighton Baines has already hinted as much, in his recent interview for evertontv.

“He’s got a different style than the one we’ve been used to in [terms] of his play, but I think it’s progressive and it will move us forward.”

A quick look at the rest of the Premier League (last season’s top 7 apart) and there is not much to strike fear into the minds of Evertonians.  West Brom, Swansea and West Ham completed last season’s top half. Norwich, Fulham, Stoke, Southampton, Villa, Newcastle and Sunderland all flirted with relegation before narrowly surviving and are joined by Cardiff, Hull City and Crystal Palace from the Championship. Apart from Newcastle who enjoyed a brilliant, but “over-achieving” season two years ago and Villa when they were an up and coming side under Martin O’Neill, none of the sides in the list have finished above Everton in the table since 2006.

Newcastle are once again a club in turmoil, the laughing-stock of the Premier League after appointing Joe Kinnear above manager Alan Pardew and totally undermining his authority in the process, causing inevitable rifts in the squad. Newcastle are more likely to be worrying about life at the foot of the table, rather than searching for their “Geordie Nation” passports and thinking of trips into Europe.

Aston Villa did improve significantly as the season wore on, and Paul Lambert has already invested in his playing squad, bringing in a few lesser known players from around Europe. This worked well for him last season with the acquisition of the brilliant Christian Benteke, but even if the club hold on to the mercurial Belgium, the weaknesses in defence which haunted Villa all season remain and it is hard to see the Midlanders finishing much higher than mid-table.

The message to the Blues is to stop worrying. Baines and Fellaini may move on in their search for Champions League football, but players have come and gone before. The Board have been quite firm in their message that players do not need to be sold, with any player sales likely to provide Martinez with significant funds to strengthen the team. As Martinez starts his Everton tenure, it is time to look forward, forget what has gone before and strive to justify the clubs motto, that nothing but the best is good enough.

15 thoughts on “Newcastle, Villa and the rest, why Everton will be top 7 again”