Everton have certainly struggled to beat Liverpool at Anfield in recent years and this was also the case throughout the 1970’s and early 80’s, but all this changed in October 1984 when a Graeme Sharp wonder strike defeated the Reds and propelled Everton to a treble over our local rivals. 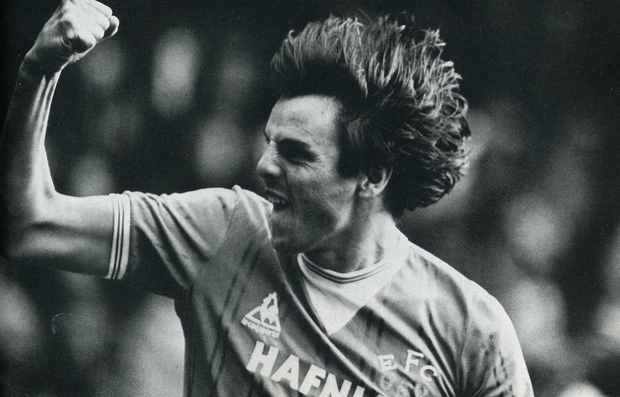 The 1984-85 season is remembered as the greatest season in the history of Everton Football Club, with Howard Kendall’s Blues winning both the League and European Cup Winners Cup. However, not many Blues remember that Everton, not only beat Liverpool at Anfield, they also secured victories at Wembley, in the Charity Shield, and Goodison Park in the league as the Toffees completed a fantastic and unprecedented treble over the Kopites.

With Liverpool the defending Champions and Everton the cup holders, the season kicked off with an all Merseyside affair at Wembley for the Charity Shield. Everton had a brilliant young team that had finished the previous season in fantastic fashion with a number of leading pundits predicting a title challenge from the Blue side of Merseyside. Liverpool were already established as a top side and were the defending European Cup holders. The game was an incredibly tight affair, but on a glorious August afternoon, a calamitous own goal from Liverpool let Everton secure the first domestic silverware of the season. Graeme Sharp broke away from the Liverpool defence and bore down on Bruce Grobbelaar’s goal. As Sharp attempted to flick the ball past the Liverpool keeper, his shot bounced back to the Scottish striker who fired a second attempt at the Liverpool goal. This time Alan Hansen denied Sharpy, only for his clearance to ricochet off Grobbelaar and back into the goal to give Everton victory by a single goal to nil.

It has become a modern tradition for the first Merseyside derby of the season to take place at Goodison, but this was not the case in the 1980’s and when Everton made the short trip to Anfield in October, the defending Champions were struggling towards the bottom of the table, while Everton were riding high and full of confidence. However the Blues had not been victorious at Anfield since the previous Championship winning side of 1969-70 had won 2-0. The class of 1984-85 were a top side and ripped up the record books with an incredible performance that secured victory thanks to the greatest derby goal of all time. A long ball forward from Gary Stevens found Graeme Sharp in space, he controlled the ball superbly and before he could be closed down he unleashed an incredible shot that flew past Grobbelaar and into the net at the Anfield Road end. The Evertonians went “berserk”, running onto the pitch to celebrate with unbridled joy.

The final derby of the season didn’t take place until May and by the time Liverpool made the trip to Goodison, Everton had already secured the title, the European Cup Winners Cup and narrowly missed out in the FA Cup final to Manchester United. The Blues were exhausted after playing two finals during the previous week and Howard Kendall was forced to make several changes to his prefered starting team. By this point, Everton believed they were almost unbeatable and whatever team Howard put out the Toffees were confident that the three points would be their’s. A young striker, who had only recently joined Everton from Grimsby Town came into the team and proved to be the match winner, Paul Wilkinson flicking home an Andy Gray header to ensure that Everton completed an unprecedented treble over their Merseyside rivals.

4 thoughts on “Everton do the treble over Liverpool”